Despite the bad reputation enjoyed by rain in the aviation community (much of it quite rightfully earned), every once in awhile it does tend to have its bright moments – especially on these lovely, warm and invariably variable spring days :). Pretty much a common occurrence on the plains of Central and Southeastern Europe on clear and sunny days, heat and humidity tend to create imposing – but generally isolated – towering cumulus clouds that come with much pomp, but not that much rain. Traveling relatively slowly with whatever wind is prevailing at medium altitudes, on the ground they usually annoy people with alternations of sun and short-duration showers; but in an airplane – especially with a camera handy 😀 – they’re a wholly different experience…

A world of contrasts as we start our takeoff roll down Zagreb's RWY 05, with another TCu incoming from the north. While it is usually seen just as the last stage of development before the fully-grown cumulonimbus, on occasion the towering cumulus cannot develop further and ends up as a medium-sized raincloud, characterized by moderately intense - but rather short - showers 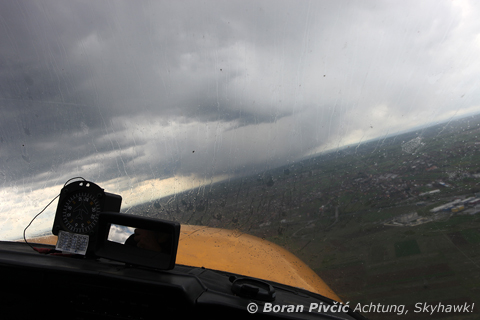 Admiring the view - somewhat 😀 - as we orbit near Zagreb Intl., waiting for the traffic to clear so we can pop in for some fuel 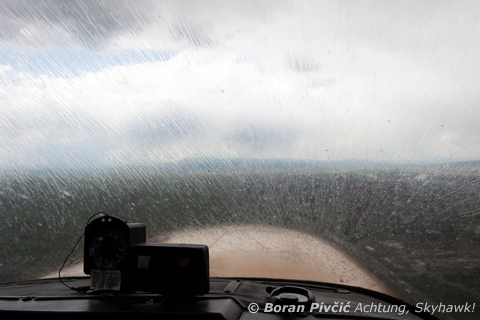 Receiving a free - and thoroughly ecological 🙂 - wash as we fly through the fringe rain of yet another TCu on our way back to Lučko. Carried on by the cloud's downdrafts, the rain can start some distance from the actual cloud - but, given the TCu's small area, you're usually in and out of it in a matter of seconds 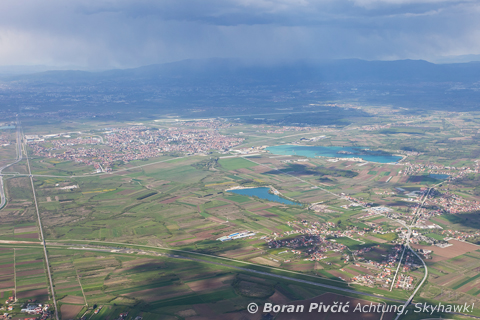 Ah, the intricacies of spring weather :). Shadows of scattered fair weather cumulus clouds pockmark the ground below while an ominous stormcloud descends from the slopes of Mount Medvednica...