Photo Report – The View From Up Here #2

With fine spring weather finally on the horizon (damn, I can’t complain about anything now! :D), it was high time to get back behind the controls – or the camera, depending on the circumstances – and do some proper cross-country flying/photography :). While we did have a few spells of nice weather during the previous months, they had only really allowed for relatively short hops in directions that avoid the mountains of Central Croatia – which had, for us on the continent, effectively put 50% of the country out of reach :). Apart from locally notorious winter up- and down-draughts, the terrain of central Croatia rules out anything below 5,000 ft – at the lowest – as a reasonable cruise altitude, one that is well within the freezing zone for a good quarter of the year. Throw in thick cloud cover, pretty common during the winter, hanging at just about those altitudes – and aircraft that lack even a rudimentary de-icing system – and flying across this area becomes a pretty unhealthy prospect :D.

Happily though, the arrival of clear skies and warm weather had pushed the 0° isotherm back up into the flight levels, allowing us to once again set our sights on one of the most beautiful parts of the country – the coast… 🙂

A view of the city of Zagreb from 7,000 ft, en-route from Varaždin (LDVA) in the north towards the coastal region of Kvarner. The aircraft (partially) in shot is a Socata TB-20, my first ever aircraft from this prolific French manufacturer :). And with that thin wing and panoramic windows, it is by far the best photography platform I’ve flown on 😀

Crossing the Velebit mountains at their lowest point, above the region of Gorski Kotar. As in a number of photos previously featured on this blog, you can easily see why this mountain range has a penchant for creating problems during periods of strong wind :). Note also how, in terms of weather, it splits the continent (on the left) from the coast (on the right)

A First Class view as we cruise leisurely above the Northern Adriatic, heading west :). Riddled with more than 1,200 islands along its length, the Croatian side of the Adriatic is at least easy to navigate down. Interestingly though, only four of those islands – Unije, Lošinj, Brač and Hvar – have airfields (two of which are small grass strips)

This pretty much sums up why I love flying :). A sunset joyride above the coast, good company and the close and involved atmosphere of a light aircraft flight deck 🙂 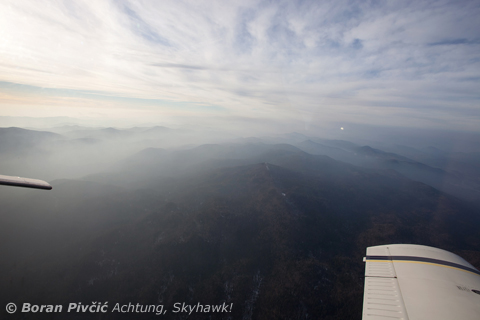 The evening mist is already beginning to settle as we race the sun back home to Varaždin. And despite it being the end of March when this was taken, you can still see traces of snow on the lee-side slopes below. Another interesting tidbit here is that this is the first time I’d managed to get both the wing and the horizontal stabilizer in a single frame 😀

Back on the more… agricultural Skyhawk as we trundle from Zagreb (LDZA) towards Split (LDSP) at FL100. Flying IFR, we had to stick to published instrument airways, one of which had included an 18 NM hop over neighboring Bosnia, seen here to the left. In the center is the mountain of Plješevica at whose eastern base (again to the left) lies the now disused Željava airbase, one of the largest underground airbases in this part of Europe 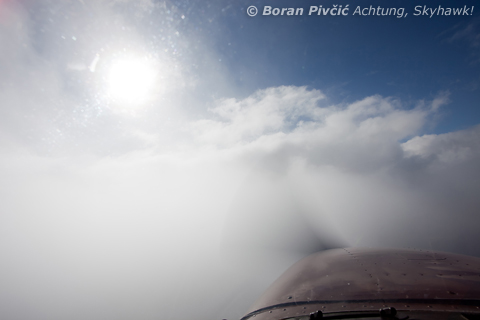 Nothing like a bit of cloudhopping to brighten up a day’s flying :). While it is all very good fun, it also has a few serious advantages: when flying in IFR in clear skies, every now and again when you turn your head you’ll – unintentionally – catch a glimpse of the ground below and gain a visual confirmation of your attitude… which isn’t really what IFR is about. Deep within a cloud though that visual cue is gone, and you’re left to your own instrument flying skills

Another fantastic view of the Adriatic coast from 8,000 ft as we cruise back home to Zagreb via Zadar (LDZD) :). The mountains may be a welcome challenge to fly through, and the boring flat plains in the east of the country can do wonders for visual navigation skills… but nothing beats an afternoon flight above the sea :). For that short moment, you haven’t got a worry in the world!

Back up at FL100 and finally above the clouds as the sun begins to set :). Flying in an area of increased humidity in sub-zero temperatures, we’d naturally picked up some frost along the way (visible on the lower windshield) – but the humidity content was not high enough for it to progress into “real icing”

More cloudhopping as the night draws near. Despite not being a fan of single-engine night flying – especially above the uneven terrain in this part of Croatia – I’d timed the flight so that night would overtake us some 15 minutes out from Zagreb… just to log my first ever night IFR landing 😀

I’ve been waiting for a long time to nail this photo :). Night had already arrived down at ground level, but nearly 3 km up, we still had some sunlight left 🙂