Short Photo Report – A Ride On A Skydive 182

Having finally terminated my extended leave of absence from Achtung, Skyhawk! – brought on by a combination of flying and personal issues, mixed with a healthy dose of no spare time on my hands – I’ve decided to come back in style with a short photo report from a rather interesting flight I’ve had yesterday :). Having finally completed my 15 hour CPL module in the morning – only 10-odd hours remaining till my final checkride – I decided I might just as well stay at the field and mingle with my colleagues, enjoying the uncharacteristically warm and mild November weather. Apart from a generally good time, one of the results was also an invitation to fly shotgun on 9A-DTD, a skydive-modified Cessna 182K, on a short training flight – notching it up as my first ever skydive plane as well as my first 182 :D.

The aircraft in question – owned and operated by the skydiving club Slobodan pad (“freefall”) – is by far the oldest 182 in Croatia (out of the very few of any age in the country), having been produced in 1966 or 1967; but in all honesty that didn’t seem to slow it down in flight :D. And even though this training mission – merely a short afternoon panorama flight above town, nothing fancy – was already familiar to me (and photographed extensively), I too didn’t let that slow me down… 🙂 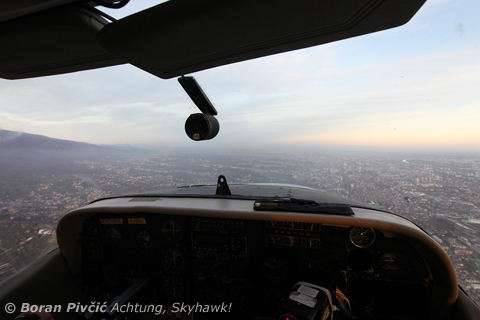 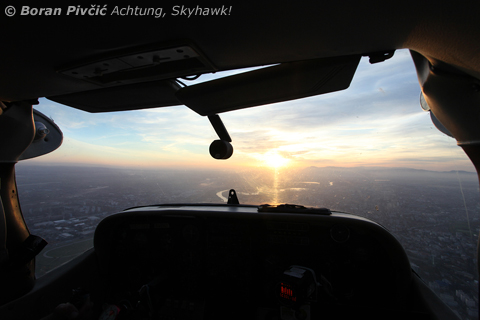 Smooth skies, a beautiful ride, silence on the frequency, the setting sun and the thunder of the 230 HP O-470... scenes like this are what make it all worthwhile! 🙂

Set the controls for the heart of the Sun :). Late afternoon flights never leave me disappointed

Banking left to enter the pattern for landing back at Lučko :). Though not clearly visible, the aircraft's instrument setup has also been upgraded with a digital CHT/EGT monitor, as well as a skydiving altimeter on the pilot's yoke

9A-DTD getting tucked in for the night, with an added impressive autumn background 🙂