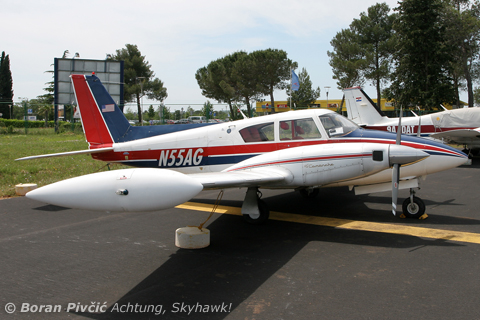 Apart from arriving in questionable style – a 30 year old Skyhawk is not the most elegant of aircraft it must be said 😀 – an added benefit of flying to the coast during the tourist season is that you can always find some interesting aircraft when you get there. Being quite close to the central European mainland, Croatia’s five coastal international airports and three port-of-entry airfields offer a convenient way of reaching the Adriatic without much undue hassle, providing the locals with a steady and varied flow of interesting light (and occasionally heavy) aircraft :).

And while by the end of May the season had still not reached full steam – with the aftershocks of the recession still being felt across Europe – I was confident that, for my last Instrument Rating training flight, I’d be rewarded with something really nice :D. My destination for the day, Zadar’s Zemunik Airbase/Airport, has a history of interesting GA aircraft, its strategic location at the midpoint of the country’s coast providing easy access to a number of well known and frequently visited destinations – all the places that a man with a plane might visit :).

With that in mind, I had crossed my fingers and hoped for the best. Thankfully, my luck held out, and this is what I’d found… 🙂

Time again for a little (engine) digression to make sense of all the turbo- terminology :D. Essentially, all piston engines have two key parameters that define their power output: the RPM and the manifold pressure, the pressure of air in the intake manifold (part of the intake system) – and consequently the cylinders. On a normally aspirated (atmospheric) engine at sea level, the maximum manifold pressure, achieved at full throttle, will never exceed about 28-30 inches mercury – or, more plainly, atmospheric pressure. As the aircraft climbs however, the air pressure drops and the manifold pressure drops with it. This results in a progressive decrease in power until the altitude at which the power produced is just sufficient to hold the aircraft in the air without sinking. This altitude is – in a nutshell – the fabled ceiling, above which the aircraft cannot climb no matter how much the pilot wants it to :). Depending on the displacement and HP of the engine – and the power requirements of its associated aircraft – for normally aspirated engines this altitude is between 10 and 20,000 ft.

If you had wanted to increase this altitude, the most practical way would simply be to either delay the manifold pressure drop so that it doesn’t start immediately after sea level but somewhere higher up, or widen the manifold pressure range so that you have more “pressure reserve” before you reach the point above which you cannot climb.

On modern engines, both of these are achieved by use of the turbocharger. A familiar component from automobile engines – especially Diesels – this is a high-speed compressor ramming air into the cylinders at high pressure, and is driven by a turbine (a glorified windmill 😀 ) spun by the engine’s exhaust gasses (hence the much-misused “turbo” prefix). In aviation applications, the turbocharger is always variable-speed, controlled by a component known as the waste gate, which controls the amount of exhaust gas ducted over the turbine, hence varying its speed. As the aircraft starts climbing from sea level, the waste gate progressively increases the speed of the compressor – thus increasing the amount of air rammed into the cylinders – to keep maximum manifold pressure attained at sea level regardless of the drop of atmospheric pressure and density.

If the climb continues when the compressor reaches its maximum speed, it can no longer compensate for the decreasing pressure, and the manifold pressure starts to drop (the compressor remains spinning at top speed). The altitude at which this occurs is called the critical altitude, and for most modern turbocharged pistons it is between 8,000 and 10,000 ft (though on pressurized aircraft, with their big high-volume compressors, this can be as high as 15-17,000 ft).

Because the turbocharger also widens the manifold pressure range, the pressure now has a longer way to fall before it reaches the point where the power produced is equal to the power needed (though, depending on type, turbocharged engines may have a higher minimum manifold pressure in order to produce enough exhaust gasses to keep the compressor spinning at max. speed). For example, the TSIO-360 engines on the Piper Seneca III have a maximum manifold pressure of 40 in Hg, roughly 10 more than atmospheric pressure. A more extreme example were the big radials of WW2 which could sustain up to 70 in Hg for short periods! A side effect of this is that the increased amount of air in the cylinders means that the amount of fuel has to be increased as well to keep the fuel-air mixture stable, which can significantly increase available power.

When both of these effects combine, the ceiling can increase to over 30,000 ft – though more often than not aircraft are limited to a lower altitude due to other design factors. For example, the Beech Duke has an absolute ceiling of a tad over 30,000 ft; but it is limited to 25,000 ft operationally because of limits of its pressurization system.

For all the turbocharger’s plus points there’s naturally a raft of minuses – the biggest being the aforementioned increase in the amount of fuel injected, meaning an increase in fuel consumption. This is exacerbated by the fact that while a normally aspirated engine gradually uses less fuel as it climbs (due to the dropping manifold pressure), the turbocharged engine does not and burns the same amount as at sea level. Only after passing the critical altitude – when the manifold pressure starts to drop – does the consumption start reducing with altitude “as it should” :).

Another problem is engine wear and tear. Most of today’s turbocharged piston engines – especially the lower displacement ones – are derived from normally aspirated models that operate at significantly lower pressures and temperatures. And while virtually all of these “mainstream” piston engines are designed and built with the possibility of turbocharging in mind, this is somewhat of a “jack of all trades, master of none” solution – if you make the engine turbo-proof, it’ll most probably be heavy and uncompetitive in the normally aspirated market; if you make it to sweep away the normally aspirated competition, it may be too light and brittle to withstand a lifetime of turbocharging. Another issue is cooling – the rarefied air at altitude is not so good at carrying away heat as the dense air near the surface. On a normally aspirated engine, the engine temps reduce with altitude, so the rarer air can still do its cooling job effectively. On a turbocharged engine, you have the same reduced cooling but – up until the critical altitude – just as much heat produced as at sea level.

Most engines have struck a good balance between the two, though the price to pay is a reduced Time Between Overhaul (TBO) and a slight reduction in service life due to the stress the whole engine block has to absorb (this is the reason why automotive Diesel engines – which work at much higher pressures than petrol engines – are made out of steel instead of aluminium). Some engines even have to have special operating procedures to enable them to meet their TBOs: for example, the Mooney Bravo – powered by the Turbocharged Lycoming Sabre (TLS) sporting a whopping great compressor – has to descend at a high throttle setting and airbrakes extended to avoid shock-cooling the engine!

And that’s all fine and dandy – but what if all you wanted was better altitude performance and to avoid all the hassles and problems stated above? What if you live in Switzerland and your airfield’s pattern altitude is 15,000 ft? 😀 Or, on a more serious note, in Croatia where you want to jump as high as practicable above the Velebit mountain range on a 35 C day, but generally don’t need the extra power?

One practical, working solution is the turbonormalised engine. Identical in design, operation and construction to the standard turbocharged engine, it nevertheless differs in one significant detail: while turbocharged engines increase the manifold pressure above normal atmospheric, turbonormalised ones do not, operating continually in the 28-30 in Hg range until the critical altitude. While this may sound less significant than it is made to be – and even appear to be a step back, given that there is no power increase – it does neutralize some of the standard engine’s operational problems, most notably increased wear and tear. With the engine now continually operating within normally aspirated pressure limits, the TBO penalty can be significantly reduced – but not completely removed, since cooling (as described above) is still an issue, but on a lower scale.

Because the engine is now operating in a lower pressure range, the direct fuel consumption is also reduced and at its greatest pretty much equals what the normally aspirated engine would burn at maximum throttle at sea level. But, as before, this fuel burn is kept to a higher altitude, so it’s not as rosy as it sounds, especially if – as in the situations described above – you just need the extra altitude performance to clear obstacles, but normally spend your time below the engine’s critical altitude at sea level consumption.

Despite this, the turbonormalised engine has met with some success, mostly on small displacement engines of light singles and twins – but, being somewhat of a niche product designed for a specific application, hasn’t become as widespread as the normal turbo (yet). To many people, just the ceiling increase and slightly better performance do not offset the added maintenance costs of the compressor and turbine, leading many manufacturers to simply select the “full package” classic turbo – or go turboprop – giving their customers more for their money…

Okay, this little and short digression has gotten a bit out of hand :D. Consider it as a bonus feature to the original photo report… 😀

NOTE: for more detailed information on turbonormalised engines – my text being somewhat abbreviated for simplicity’s sake – you can go to here