Some choices in life are actually pretty easy to make. Take, for example, my options the other day following a 4 AM wake-up to work a dawn flight: A) get some sleep; B) get some exercise; or C) drive an hour and half (one way) to a neighboring country to try and catch a pretty rare turbine Cessna 206… I mean, the choice is self-selecting! 😀

The machine that had managed to score higher than my own bed (!) is a Turbine Conversions Turbine 206, a fresh crack at mating a mid-life Cessna 206 airframe to a (moderately) powerful low-altitude turboprop engine. But, whereas the most successful attempt so far – the Soloy 206 – is based around the same Rolls-Royce/Allison 250 series engine used on the Bell JetRanger, Turbine Conversions’ mod relies instead on the far more famous Pratt & Whintey PT6A – and is the first time this engine had ever been fitted and certified on a member of the Stationair family. With only three examples flying in Europe so far, delaying sleep was definitely a better call, so I plonked myself into the car and went off to see what’s what 🙂 . 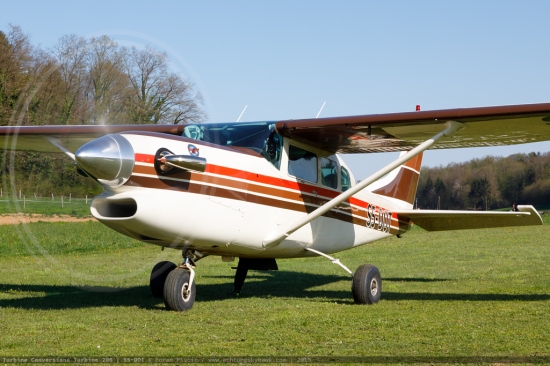 A real Quasimodo: ugly as hell on the outside, but with a heart of pure gold underneath

The recipe for this sort of thing has always been pretty straightforward: take an older generation utility 206, give it a large improvement in hauling performance as cheaply and simply as possible – and then make it work on paper so that it can legally carry paying passengers. And while sticking in an engine that may be worth three times the rest of the aircraft may not sound like the best way to do it, the idea does have a fair amount of economic sense behind it. Stationairs have always been tough birds with long lives, so even a model several decades old can be reasonably expected to have quite a few years of service left; being several decades old means that they were likely paid off in full ages ago, and have none of the fiscal baggage that newer models are often burdened with; and they can be cheap to buy, spares are plentiful, support is available worldwide – and there’s enough accumulated user experience out there that even a fresh operator can learn the ropes quickly and without undue trouble.

Get all of these right (admittedly, not an easy task!) and the turbine conversion can end up being a pretty cheap, sufficiently efficient and very reliable ticket into the utility turboprop world, especially for smaller operators who cannot afford a bespoke type such as the Pilatus PC-6, PAC 750 or Quest Kodiak – or are in regions where Avgas is fast becoming a thing of the past. Get it right and even the conversion’s many downsides – such as fuselage-limited capacity and higher long-term operating costs – may not be critical enough to offset the advantages of having a turboprop – ANY turboprop – at your disposal.

To try and achieve the above, Turbine Conversions – a longtime PW&C user – decided to bank once again on the company’s most famous engine, which – while heavier and more expensive all round than the RR 250 – had an enviable reputation and true global reach on its side. Initially, the mod started out with the 550 HP PT6A-20, but this was changed before production began to the equally powerful PT6A-21 – the difference being that the -21 is in essence a de-rated version of the 680 HP PT6A-27, which retains the latter’s more potent core for a bit added torque and improved hot-and-high performance.

Being a cheap-and-cheerful “firewall forward” solution intended for the rough-and-tough utility market, the Turbine 206 is not really loaded with juicy features; apart from the new engine and its associated accessories, propeller, mountings and structural changes, the only things that stand out are custom exhaust stacks that eek out a bit more thrust – as well as the company’s own air inlet design with is said to improve the flow of air into the engine. The upgrade is rounded out by an Electronics International MVP-50 digital display panel – which replaces all traditional steam gauges – as well as modified engine control levers to cater for its different operation.

Unlike turbine conversions of touring aircraft – where the interior often has to match the performance – both Soloy and Turbine Conversion mods retain the utilitarian equipment levels of the aircraft they were based on. Really the only dead giveaway that there are 550 horses living up front is the MVP-50 display, located above the right-hand panel guard

Another change – albeit not as easily noticed – are the engine control levers, which now behave differently to those on the piston 206. The throttle lever now has to incorporate a reverse function, the prop has to have feather – while the condition lever is actually simpler, with just two discrete positions (HIGH IDLE & CUT OFF)

While all of this is pretty interesting in itself, the machine I had actually gone out to see is just that bit more special 🙂 . Nowadays called S5-DOT, in its past life as N7351Q it had actually served as the prototype and validation vehicle for the entire Turbine 206 mod, and was the one put to the test in order to receive the Supplemental Type Certificate (STC) needed for sale and commercial use.

Originally a stock U206F manufactured in January 1973 with the serial U206-02179, DOT is a fresh addition to the fleet of Letalski klub Šentvid, based at the picturesque airfield of Šentvid pri Stični – the same place I had gone last year to have a one-on-one with another Cessna turbine mod. Replacing the smorgasbord of outside aircraft that previously had to be leased at significant cost, DOT has arrived right on the dot for the beginning of the commercial skydive season – so with any luck, it should be a frequent dot on the Slovenian sky!

Rolling full laden toward RWY 14 for another afternoon run. Though turbine power could not change the type’s hauling capacity all that much, it did wonders for both take-off and climb performance at high weights – not an insignificant feature given the close-in hills in all directions and high daytime temperatures… 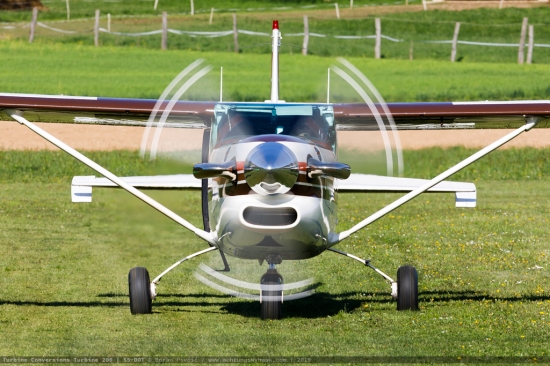 Like all piston-to-PT6 conversions, the Turbine 206 looks quite brutish from the front. Note also the offset propeller (and engine) installation, designed to reduce the adverse gyroscopic and aerodynamic effects of the new powerplant

Waiting for the next load. Like any self-respecting skydive machine, DOT has a full set of handles, steps and door covers, and can comfortably accommodate up to six skydivers at once

The Dependable Engine
(unless you’re talking about the GTF!). An interesting operational feature is that engine starts are performed with the assistance of an outside battery kart, since the huge current draw from repeated spool ups would drastically shorten the service life of the on board battery

As always, I would like to thank the people who made this photo shoot possible – in particular Mr. Tone Dolenšek, who spent quite some time keeping me company and answering my Achtung, Skyhawk!-y questions!