Short Photo File – Out of Africa

Well, not really Africa geographically – but that was my first association when I stumbled upon a Diamond DA-62 and CERVA CE.43 Guépard (cheetah) on the Dubrovnik Airport (DBV/LDDU) GA apron 😀 (it may be corny, but it works for me!). After a photographic dry spell, this unlikely pair has been a godsend for me – and since both types have a bit of a (hi)story behind them, they were the perfect match for a quick & dirty Acthtung, Skyhawk! feature… 🙂 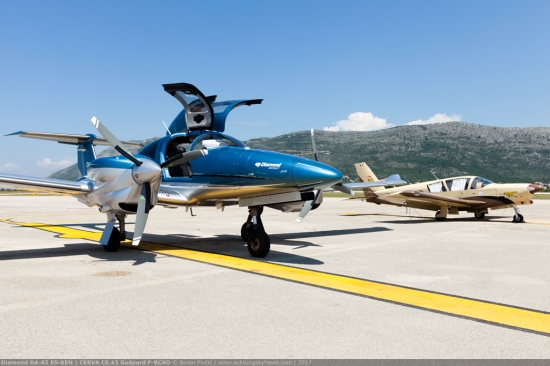 The past and future of light aircraft design in Europe… but even though the DA-62 is a vastly superior machine on all levels, one cannot but be drawn to the charisma of the lumpen – but incredibly rare – Guépard…

Guaranteed to catch more than one eye at any airport, the regal DA-62 is Diamond’s current flagship propeller product, a seven-seat grand tourer clothed fully in carbon fiber and pulled along by twin 180 HP Austro Engines AE330* four-cylinder Diesels. While the overall power available sounds underwhelming given the speedy look of the 62, the engines deliver quite a bit more than the raw numbers suggest, with a 190 knot high speed cruise doable on only 17 USG of Jet A per hour combined – a figure more common to a single engine of a similarly sized classic twin 🙂 . 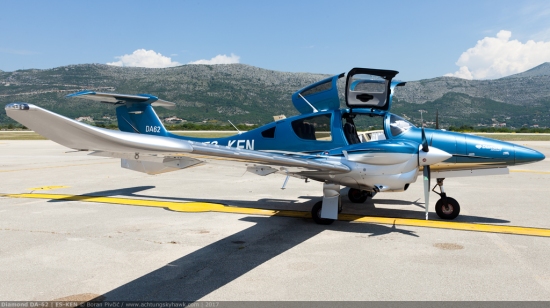 While at first glance it seems to be just a stretch of the ubiquitous DA-42 Twin Star, Diamond’s construction technique – basing each type around a custom carbon fiber shell instead of a traditional frame used on metal aircraft – means that the 62 is a whole different animal under the skin.

This turn of performance – and the depth of engineering hiding under the carbon – means that the polished Diamond is perfectly capable of standing with the best of the classic luxury piston twins, including even the default standard, the Beech 58 Baron. Compared to the current production-standard G58**, the DA-62 carries the same load (710 vs 705 kg) and cruises all out just a teeny bit slower (191 vs 202 knots) – but does so with 240 HP less and at roughly HALF the fuel flow (19 vs ~ 33 USG/hour). Not a bad showing from a small company operating out of an equally small town in Austria!

ES-KEN itself – the 43rd DA-62 made – had on this day stopped for rest at Dubrovnik (DBV/LDDU), before continuing south to its new home at Tivat (TIV/LYTV) in neighboring Montenegro 🙂 .

* of interest, the AE300 series represents Diamond’s own modification of the 2.0 liter turbocharged Diesel out of the Mercedes A and B Class compact cars – the same engine that was the basis of the now-defunct Thielert Centurion 2.0 (the earlier Centurion 1.7 was based on the smaller, 1.7 liter version of the same unit).

** of course, this brief comparison does not take into account operational factors not related to outright flight performance, such as price, maintenance requirements and availability, fuel costs – and specific aircraft ability, such as the Baron’s ability to operate from rough strips thanks to its robust, Bonanza-derived landing gear.

There are two types of airborne visitors to the Croatian coast – those who fly cattle class, and those who go classic piston single class. Another of those beautiful gems that make aviation photography so rewarding, F-BXCO had instantly caught my eye even tucked in among the high-speed carbon fiber pornography lining the GA apron.

At one time called “France’s Bonanza killer”, the somewhat ungainly Guépard can trace its roots back to the nowadays-forgotten WA.4, a late 60s four-seat steel-fabric-and-plywood training and touring aircraft designed by Wassmer, the country’s most famous glider manufacturer. One of the first French light aircraft designed around the more marketable usability and practicality principles used in the US, the WA.4 had benefited greatly from Wassmer’s glider experience, with pleasant, predictable handling and very good all-round performance provided by its 250 HP Lycoming IO-540 engine. Spurred by the type’s success on the French market, the Wassmer works had soon decided that an all-metal version could be an even better sell, teaming up with engineering company Siren SA to make this idea come true. Since French manufacturers have always had a thing for mergers and complicated names, the first thing to come out of this partnership was the CERVA joing venture, short for Consortium Europeén de Réalisation et de Ventes d’Avions – or the European Consortium for the Development and Sale of Aircraft.

Essentially just slapping a fully-metal skin onto the WA.4, the new consortium had quickly created the WA.43 – soon to be renamed CE.43 – France’s first proper, modern and “international-standard” touring machine. But while it looked, sounded and flew like an American aircraft – not to mention boasting a bum-numbing 7 hour endurance – it would nevertheless always be the product of a small company in rural France, a fact that had immediately put it at a market disadvantage compared to equivalent aircraft from the much more industrious Big Three (Beech, Cessna and Piper). This disproportionate footing – which had already killed a number of European designs – would be fatal for the Guépard as well, with only 44 manufactured between the type’s introduction in 1971 and Wassmer’s bankruptcy in 1977… and most of these on request of the French Air Force. In a last ditch attempt to save the ship from sinking, CERVA would in 1976 attempt to market two higher performance versions, the CE.44 Couguar with the 285 HP Continental Tiara 6*** engine – and the CE.45 Léopard with a turbocharged Lycoming TIO-540. However, only a handful of each version were built before the type as a whole ceased production...

F-BXCO itself was manufactured in 1975 as the 30th Guépard off the line – and, according to available info, had always flown in civilian hands.

*** one of the very few US post-war piston engines to actually have a “proper name”, the Tiara was Continental’s 1970s shot at making a next generation powerplant that would appeal to manufacturers (and owners) of the type of high-performance piston singles that were becoming rapidly popular at the time. While it still retained the traditional boxer layout and most of its mechanical workings (including bog-standard fuel injection and optional turbocharging), the Tiara was from the outset conceived with a small cubic capacity (405 cu in for the six-cylinder version used on the Guépard) and high rotation speed (up to 4500 RPM) in order to get the maximum power and efficiency out of the least amount of engine. The central element to making this work was a special reduction gearbox called “Hydra-Torque”, which both lowered propeller RPM to half the engine RPM (0.5:1 reduction ratio) and dampened the various vibrations and stresses commonly experienced on traditional geared engines (more detailed info available here). This – as well as tweaks to the engine’s various components and accessories – made the Tiara quite a bit lighter and smoother than a comparable engine, traits that Continental had hoped would appeal well to buyers wanting a quiet, comfortable and dignified Mercedes of the skies.

However, while this was all fine and dandy in theory, the engine did have a number of noticeable drawbacks. In some airplane installations it was quite loud – and in ALL installations it tended to drink like its much bigger siblings. Coupled with different (and more expensive) maintenance requirements on account of the Hydra-Torque system, this made the Tiara scarcely worth the bother over a traditional large engine – and is viewed in some quarters as an unnecessary attempt to “reinvent the wheel”. Despite this, it did manage to find its way into a number of aircraft types – and would, interestingly, achieve some popularity in France, having also been installed into the Robin HR.100 (creating the 285 HP HR.100-285 and 320 HP HR.100-320).

Since I’ve been going on a lot about rare aircraft in general of late, I thought I might as well continue the trend here and slot in two more oldies I’d come across over the course of this month. Not really on the same level as the CE.43 in terms of outright rarity – very few machines are – they’re nevertheless a sight for sore eyes, and well within Achtung, Skyhawk! tolerances! 😀 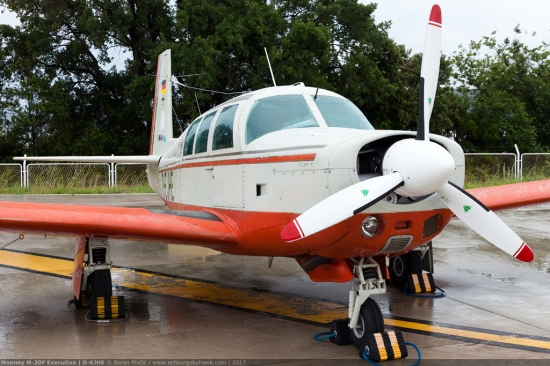 And the classics just keep on piling up! Having already snapped a brand new DA-62 – and the incredibly rare CE.43 – the day before, I was smitten to find a mint Mooney M-20F at a rainy Split (SPU/LDSP). The last of the type’s snub-nosed models, the F was the final development of the original M-20A before the design was cleaned up by famed aerodynamics specialist Roy LoPresti in the mid-70s, resulting in the highly-successful M-20J. Even though it’s not as rare as its looks suggest, finding one is definitely a treat – especially since D-EJHE is celebrating its 50th birthday later this year!

Some people love oldtimers of the road… while others love oldtimers of the air. Manufactured way back in 1958, this very rare Bergfalke – “mountain falcon” in German – perfectly encapsulates just why I love tooling through hangars at small local airfields. A thoroughly upgraded version of the mid-30s Akaflieg Mü13 glider, the Bergfalke had upon its introduction in 1951 quickly laid the foundations for what would become Schiebe Flugzeugbau – and served as the basis for the company’s most popular aircraft, the SF-25 Falke Touring Motor Glider (TMG). Another interesting factoid is that the type had been manufactured mostly at Riem, the main international airport for Munich until the opening of the current MUC on 17 May 1992… E7-1112 itself (latterly known as D-8241) is nowadays on service with the AK Livno flying club at Livno Airfield (LQLV), where it had arrived just recently as a – donation. Despite its advanced age, it is still a frequent flyer, and – according to club members – can hold its own even against more modern metal gliders.

One thought on “Short Photo File – Out of Africa”