Photo Report – News From The Realm

Faced with a consistent lack of anything of note to write about – except the weather, which has been so poor lately that catching a good flying day is on par with winning the national lottery 😀 – I’ve decided to fill the void by cobbling together something of a “mix post”, combining the few recent photos from Lučko, Pleso and neighboring Slovenia into one convenient little package. It’s not really much to be honest, but hopefully it’ll provide for a bit of amusement until the arrival of an extensive, work-in-progress historical article… 🙂 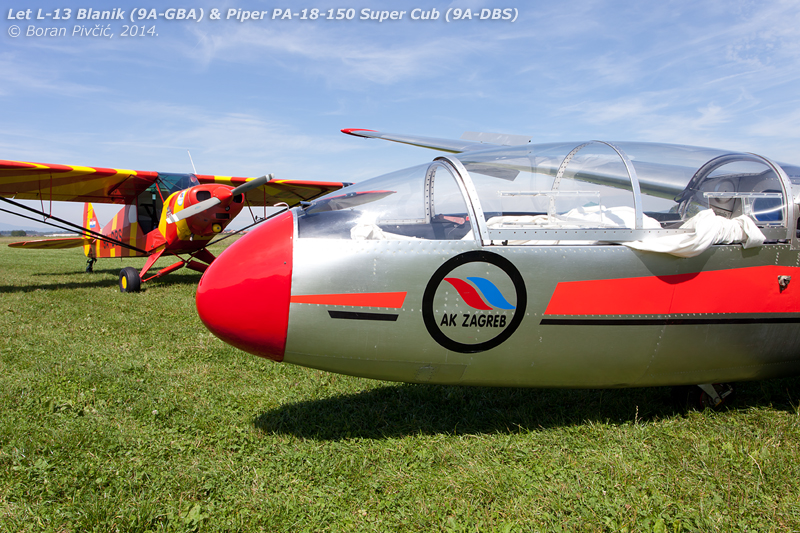 The only (operational) Blanik at Lučko poses with its best friend while they wait on RWY 28R for their pilots to assemble. In the event, the first flight of the day would be with a future gliding student, who was given a short demo flight above the western end of town…

While it sounds deceptively simple, a proper aerotow take-off often requires a helping hand on the ground. Due to the absence of a conventional landing gear arrangement, most gliders – especially those boasting larger wingspans – require someone to hold the wingtip at the start of the take-off run. Intended to prevent it from scraping along the ground and possibly slewing the glider off course, this is only necessary during the first few seconds of the run, until the speed builds up sufficiently for the aerodynamic forces on the ailerons to take over. 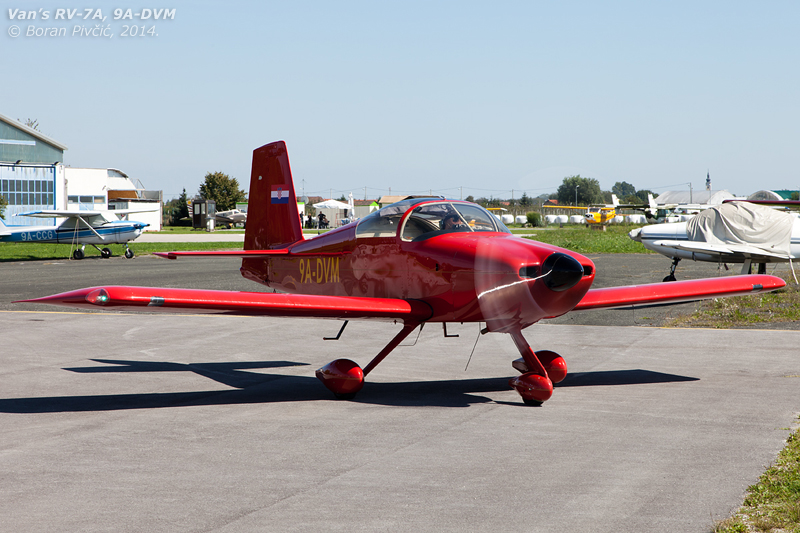 One of the most beautiful kit planes in Croatia is seen rolling towards RWY 10R after a short fuel stop. Part of the famous Van’s family of nippy two-seaters, DVM is the company’s only design registered here, and spends most of its time staying clear of the more frequented airfields (to the continuing disappointment of the author).

The simple and uncluttered cockpit contains everything one really needs for a good time aloft. Interestingly, even though it is powered by a four-cylinder engine developing 200 HP, DVM uses a fixed pitch propeller – something not generally seen on speedy homebuilt kits of this power range. 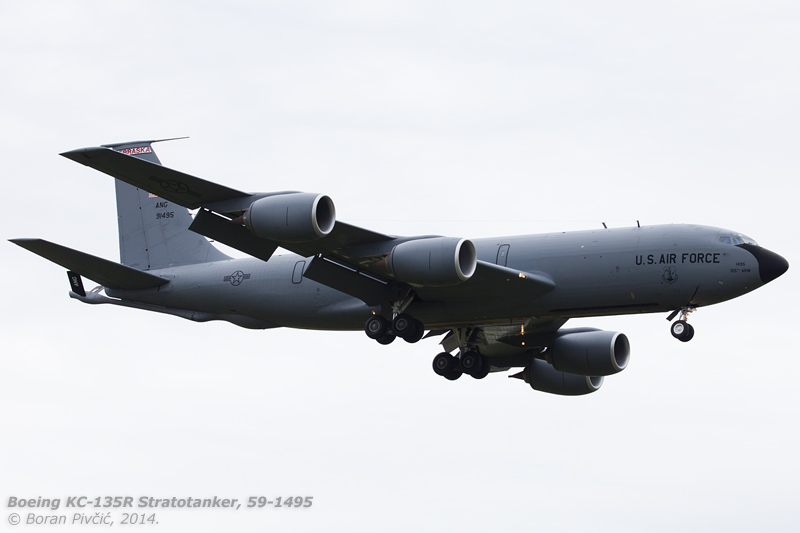 The “Grey aircraft only seem to fly in on grey days” photo series continues with the legendary Stratotanker, which had on this occasion hauled itself into Zagreb all the way from Minneapolis. A modernized version of the aircraft that many still consider to be THE tanker, the R model differs primarily by its powerplant, dispensing with the old J-57s in favor of the modern, economical – and significantly quieter – CFM56. An interesting detail is the frost on the wing underside, a common feature on original 717s* during humid days.

* and that isn’t a misprint. While the “717” is today associated exclusively with the re-branded McDonnell Douglas MD-95, the designator had actually been in use ever since the late 50s. Following the introduction of the Boeing 367-80 jet airliner prototype – the famous “Dash 80” – a number of interested civil operators had requested that the design’s slim fuselage be widened to accommodate a six-abreast seating configuration. Boeing had readily agreed, thus giving birth to the 707 as we know it today. However, the US military – also one of the interested parties – was satisfied with the Dash 80 as-was, lobbying that it too be put into production. Knowing that the American military establishment has always been a loyal – and well-paying 🙂 – customer, Boeing agreed to these terms as well, christening the new-old model the 717.

But, since the US military has always used its own original aircraft designators, the new aircraft was quickly labelled the C-135. As the years went on – and the design started making a name for itself in its military guise – the 717 brand had slowly begun to fade from people’s minds… so when Boeing bought MDD in 1997 and inherited the in-development MD-95, they simply recycled the old designator and pinned it to the venerable Maddog (more precisely, the -95 became known as the 717-200 to differentiate it from the original, which had been known within Boeing as the 717-100 since its inception) :).

Another of the year’s Globemasters to have visited Pleso, “Reach 574” is just about to put to an end its long flight from Mazar-i-Sharif in Afganistan. Transporting home soldiers of several NATO nations, it would eventually depart again towards Kogalniceanu Airport, serving the Romanian coastal city of Constanta.

A machine that gives no impression that it is actually 33 years old, DJM is one of the last Skylane RG models to have been manufactured by the renowned Reims works, located in the town of the same name up in northeastern France. Sporting retractable landing gear, full IFR equipment and the capability to carry four people with nearly full fuel tanks, the 182RG is probably one of the best cheap – but still capable – light touring aircraft nowadays available… 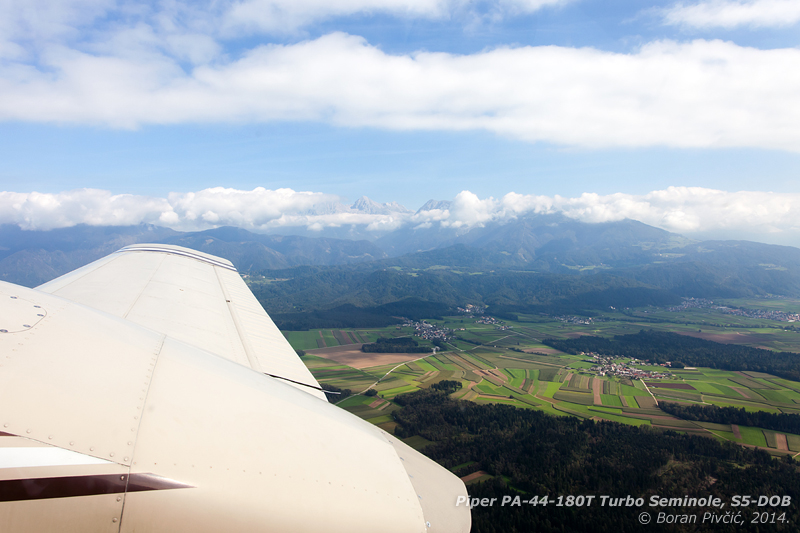 A bit of that Alpine feel as we climb along the MODRO 1W departure procedure following takeoff from RWY 30 at Ljubljana (LJLJ), Slovenia. While we were expecting (and hoping for) a bit of fog to test our instrument skills, by the time we’d gotten airborne it had already transformed into broken mid-altitude clouds, leaving us with an almost ideal late summer’s day (despite the frosty 12 C out on the apron!).

EDIT: after a lengthy struggle with an uncooperative piece of editing software, I’m also happy to bring you a short video clip to accompany the previous photo :). Mind you, it’s not really my best work to be honest, but I was handed a GoPro camera and told to have fun with it, so I tried to make the best of the situation (especially considering I did not get a suction mount to securely stick it to the window)…