Operations – The Empty Skies of Croatia

On the whole, I normally do not get much in the way of opportunity to scribble about the operational aspects of flying (and aviation in general) here in Croatia. Most of the time our pedestrian aviation scene simply doesn’t produce any material worth writing home about, while the country’s mostly pleasant terrain and climate – despite my regular rantings 😀 – also leave little in the way of excitement :).

On 30 July however, my hand was suddenly forced into action by the arrival of cyclone Melisa, another in an increasingly unusual string of low pressure systems to hit the region of late. Having made landfall on a broad front between the Adriatic towns of Pula and Zadar, Melisa had initially seemed to be a strong – but otherwise generally harmless – rainstorm, which would leave behind the occasional flooded street, but little else. However, news reports from Zadar had quickly revealed that this was no usual event, with the nearby island of Silba receiving 218 liters of rain per square meter in just 24 hours – an amount it normally gets in three months!

The red flags here in Zagreb were already beginning to come up by the time the cyclone had crossed the Velebit mountain range, having been replenished along the slopes by a strong, moist southern wind. Increasing in strength, the core of the storm had started turning slowly towards the city, prompting the Zagreb Airport (ZAG/LDZA) met office to issue a series of increasingly pessimistic TAFs – culminating in the dreaded +TSGR, thunderstorms with heavy hail…

The situation during the worst of it, as seen by the State Meteorological Institute weather radar in eastern Croatia (the city of Zagreb is denoted by ZG)…

A similar, but more colorful, snapshot from neighboring Slovenia. As you can see, the core of the cyclone had passed several miles south-east of the city center – rolling pretty much directly across the airport.

Though the hail had failed to materialize (at the airport at least), the torrential downpour that followed was about to launch ZAG into a world of issues. One of the day’s METAR reports perhaps best illustrates just what was going on out there:

In normal-person speak, this reads out to:

The first thing to go wrong was the runway midpoint transmissometer (one of three such units that measure RVR). This was not all that unexpected to be honest, since they also have a tendency to fail during heavy snows (and are an endless source of amusement during the winter 😀 ). Pretty soon however, the downpour became so severe that all operations were stopped dead in their tracks, eventually leading to the full closure of the airport (on top of the fact that even before the storm hit, flights were being delayed by 30 minutes due to anti-hale rocket activity in the area).

However, the worst was yet to come. Several minutes later, I was informed by a colleague – who’d been listening in on the tower and ops frequencies – that ZAG had suffered a “complete technical failure”. Tuning to the tower myself, I was to discover that pretty much the entire airspace surveillance system was down; Approach Control, Area Control, the works. Effectively, the whole of the Croatian ATC – with the exception of the individual Towers – had suddenly gone completely blind.

The issue that had caused the problem was later reported to be a leak in the Area Control Center main building, which had allowed rainwater to make it down into the surveillance system’s power supply, shorting it out instantly and plunging the ACC into darkness. While still unconfirmed officially, this had already sparked some local controversy, especially given that the building was purpose-built (at great cost) and commissioned only nine years ago…

EDIT: the cause was later revealed to not be just a mere leak, but a torrent of water that had suddenly flooded the master electronics room (located under the main ACC building). Subsequent reports had put the depth of the water there at between 1 and 1.5 meters…

A far more immediate problem though was the effect this failure was having on the flow of traffic through the country. Unlike its larger neighbors, Croatia has only one FIR – Flight Information Region, the area in which ATC provides its services – which covers its entire territory, and which is further subdivided into six “sectors” for easier management. However, all of these sectors are controlled and managed centrally from the same location, the ACC building at ZAG. With it out of the picture, there was no means to provide any form of control within the country’s airspace, leading Eurocontrol to impose the so called “zero flow rate” *.

* a common misconception is that a zero flow rate is equal to airspace closure. This is not so. When the airspace is closed outright, no flight is allowed to operate in it, be it an airliner, bizjet, private, IFR, VFR, training or any combination thereof. With a zero flow rate on the other hand, Eurocontrol’s Central Flow Management Unit (CFMU) simply does not approve any IFR flight plans that cross the target airspace. So, while the big birds were not allowed in, I could have taken my Skyhawk and gone flying without problems (apart from the rain obviously 🙂 ). 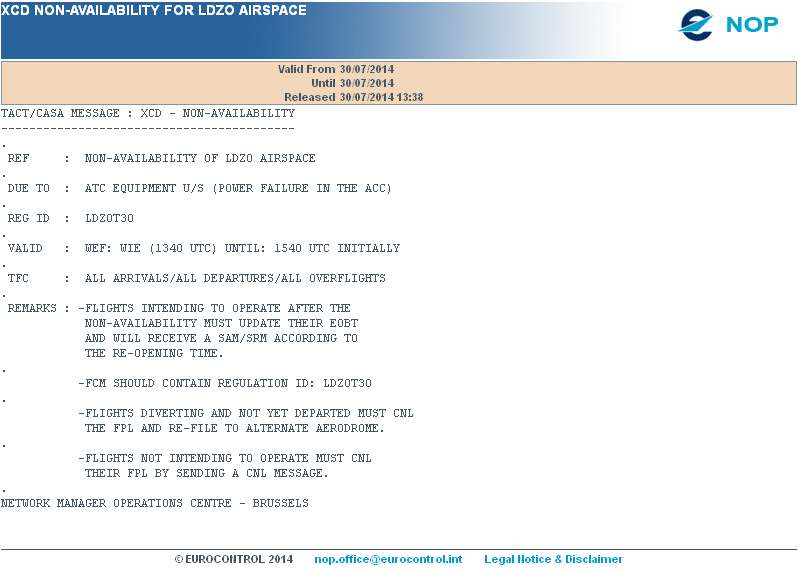 The first of Eurocontrol’s “non-availability” messages for Zagreb FIR (LDZO). 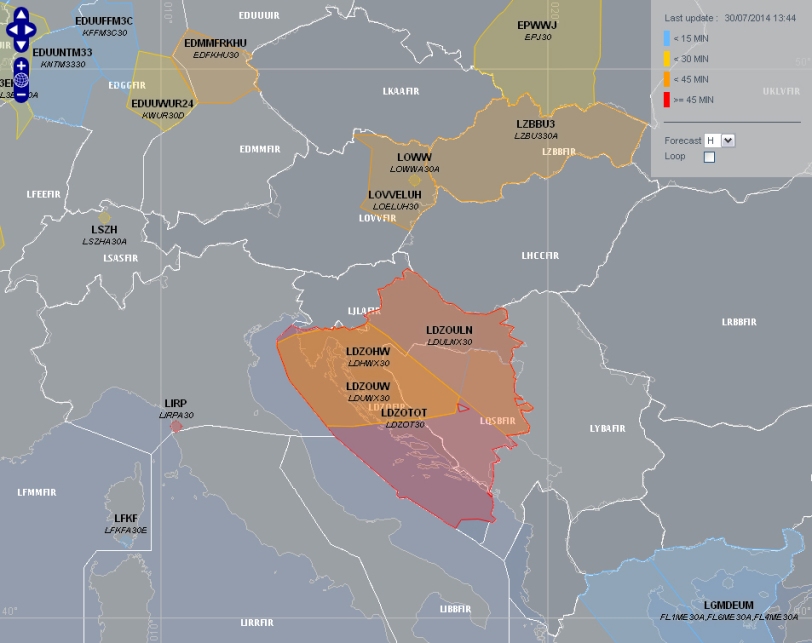 Eurocontrol’s Network Situation snapshot showing the average delay per FIR. Taken during the peak of the storm, it shows that even before the ACC failure the weather was beginning to have a severely adverse effect on the traffic picture.

By the time all flights had left Croatian airspace – or diverted to nearby airports – we’d gotten a scene we haven’t seen since the eruption of Ejyafjallajökull back in 2010… and right in the middle of one of South-Eastern Europe’s busiest corridors.

Activated at 13:40 UTC (15:40 local), the restriction was initially specified to last until 15:40 UTC, but was in the event extended to 16:40 and then finally 17:00. With the ACC restored to a minimal operational status, the restriction was lifted at 17:03, allowing traffic to resume using Croatian airspace. However, with the impetus being the get up and running as quickly as possible, the ACC had resumed operations with just three of its six sectors operational, each running at just 25% capacity – with expected effects on delay times… 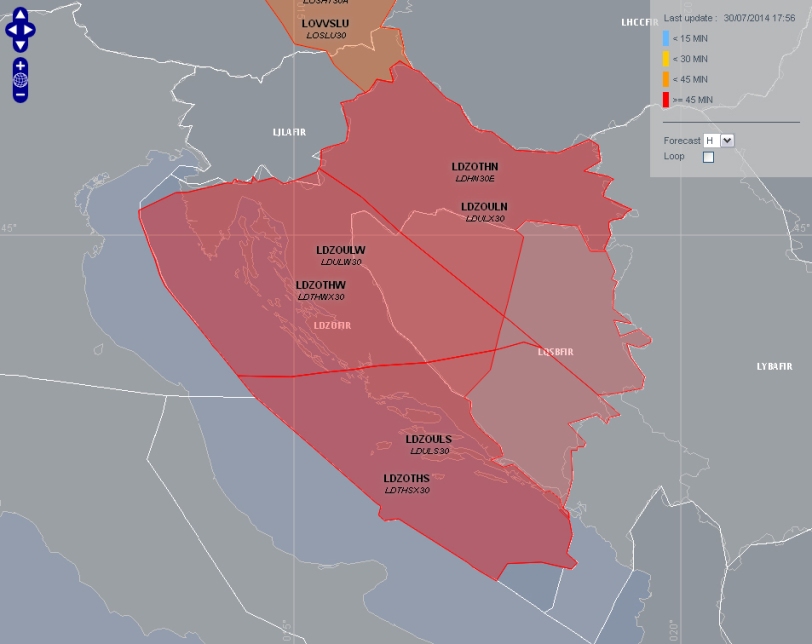 50 minutes into the resumed operation, the delays were still in excess of 45 minutes. However, the priority was to get the flights on the ground back into the skies, as well as smooth out the flight paths of aircraft swerving to avoid both the storms and Croatian airspace.

Within the hour, all six sectors would be up and running, though still at just 25% of their nominal capacity. However, as the technicians worked their spanners off in the ACC, delays had started steadily dropping up until 21:00 UTC (23:00 local) when they dropped below the 15 minute mark and Croatia became grey again :D.

Other effects and consequences:

Unsurprisingly, Hungary had borne the brunt of the traffic diverted around Croatia. The high volume of aircraft suddenly crowing their airways – combined with the cyclone’s continued northward path – would cause a cascade effect, causing delays on par with those experienced in Croatia at the start of the storm (glowing bright red on the Network Situation snapshot). However, with only the west of the country affected, things had soon stabilized and delays dropped back to more manageable levels :).

Back at ZAG, other buildings had also suffered during the downpour. Drainage canals swamped by the sheer volume of water were responsible for the partial flooding of TWY F, ZAG’s only parallel taxiway and the only way to get to the RWY 23 without backtracking along the runway. The passenger terminal had suffered the same fate, though I’m told the flooding was on a very small scale and quickly taken care of…

One thought on “Operations – The Empty Skies of Croatia”