Video – A Whine and a Screech with a Turbine Cessna 206

By me
All photos (and videos) me too, copyrighted

Any regular readers of this blog may have noticed that my base airfield tends to have quite a lot of skydive aircraft for its size (ignoring for a moment the issue of their airworthiness – or lack thereof :D). However, most of these are members of the Cessna 18X family, and while cheap to operate, they do not have much in the way of carrying capacity for anything but the most basic skydive operations. Historically this had been addressed by temporary leases of larger aircraft (mostly L-410s and An-2s) from neighboring countries, but it has been quite awhile – more than a year in fact – since we’d seen the last of them…

Thankfully, this had changed for the better a couple of weeks ago when Lučko became host to a very interesting Cessna Stationair from Germany – a still-rare Turbine 206 :). 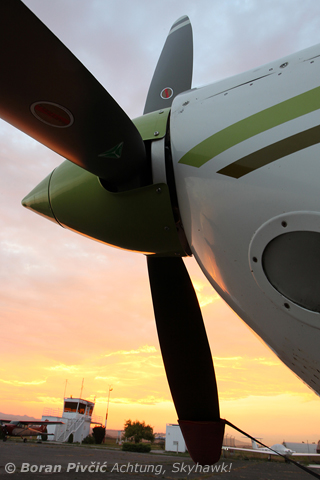 The long, narrow nose and the big three-bladed propeller had instantly hinted of the power hiding under the bonnet... 🙂

Converted to this configuration by Soloy of the US, the Turbine 206 is essentially an older, paid-off and cheap 206 airframe re-engined with a 450 HP Allison 250-C-series turboprop – the same engine, albeit with a different gearbox, that powers the Bell JetRanger helicopter. With 50% more horsepower on tap than the standard Stationair  – not to mention the huge increase in torque – the Turbine 206 is a stellar climber and had quickly become a favorite of every skydive club… that could afford it :D. The example pictured here, owned by Aeroclub Walldorf and registered D-ETHW, had started life out as a stock U206G, before being converted to the Turbine 206 Mk. I standard (based on the Allison 250-C20S) sometime in the early 2000s.

Warming up for the first skydive flight of the day. While its looks are at best questionable, there's no denying its awesome performance: with a full load of skydivers, it had managed to climb to 1500 ft AGL before the second turn of the traffic circuit - and on a 30 Centigrade day at that!

And even though I’m well familiar with the distinctive start-up sound of the 250C – the deep whine, the clicks of the igniters and the rising screech as the compressors spool up – I couldn’t resists taking a few videos as it went about its business… 🙂