By me
Video and photos me too

In a departure from my standard photographic norm, I’ve decided to try my hand at a “video report” and post a short clip (my first YouTube submission too :D) from an international flight I’d flown about a week or so ago. Having abandoned all attempts at completing my CPL time build in Zagreb’s increasingly horrendous weather, I soon retreated back to Portorož, Slovenia for the weekend, intent on nailing those four remaining hours while I still had my hand in with the local aircraft. While there, and looking for a creative way of burning two hours’ worth of Avgas, I decided I might as well head for Venice, Italy to finally see this fascinating city from the air (and notch up another international destination in my logbook 🙂 ).

Not really spoiled for choice landing-and-handling-tax-wise, my destination for the day was virtually self-selecting: the very interesting Lido Airfield (ICAO: LIPV) located on one of the city’s historic islands :). With a 1000×45 m grass runway, Lido – previously known as San Nicollo – is pretty much in the same class as my base airfield of Lučko, and is as such a popular and comparatively cheap destination for pilots flying into the city. 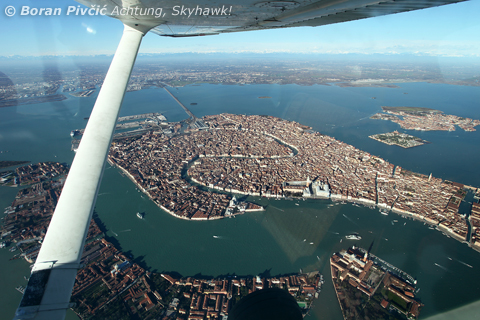 The only way to fully experience the architectural madness that is Venice is from the air :). Flying over the southern reaches of the city at 3,000 ft by grace of the fantastic air traffic controllers at Tessera airport (LIPZ), itself visible near the upper right hand corner of the shot. Also sorry for all the reflections... after several days of persistent rain the air was clean, the plane was clean, the windows were clean and the sun was out in force, all making for a technically challenging photo. Further complicating things is that I snapped this photo without proper aim, since I was holding the 1.5 kg camera at arm's length from the pilot seat (and hoping the settings I'd preselected worked) 🙂

And while my visit would amount to just 30 minutes on the ground – enough to stretch a bit and tidy up the mass of maps and charts littering the cockpit – it did give me the opportunity to make my first decent landing vid 😀 (however, my video editing skills and equipment are nowhere near their photo equivalents, so the quality does leave a lot to be desired). For a brief walk-through, the video starts at the end of the right-hand downwind leg for runway 05, goes through base (with a few views of Venice) and final, and ends when the uneven grass runway dislodges the camera from my makeshift stand on top of the panel :D…