While not a “proper airshow” in itself, the “Susreti Za Rudija” (roughly translated as “Meetings for Rudi”) commemoration includes a strong air presence, which traditionally comprises a number of light aircraft, in addition to the airforce fast jets and helos. This year – after missing out last time – I finally managed to hitch a ride on two of our club airplanes that were scheduled to take part in the proceedings. Naturally, my camera never left my side so, with plenty of photographic evidence, here goes…

1. Background to the show

The “Susreti Za Rudija” event first started several years ago to commemorate Rudolf “Rudi” Perešin, our most famous military pilot. Born in the town of Gornja Stubica near Zagreb, he was one of the best MiG-21 pilots in the former Yugoslav Air Force, who in 1991. (at the start of the Yugoslav Civil Wars) defected to Croatia with his MiG-21R. Unfortunately, he couldn’t land at Zagreb’s Pleso airport, so low on fuel – when isn’t a MiG-21 low on that? – he proceeded, without any form of clarance, to Klagenfurt, Austria and landed there. His jet, coded 26112, was impounded, but Rudi was allowed to return to Croatia where he continued flying for the nascent Croatian Air Force.

Airliners.net photo of 26112, now in a museum in Vienna

He was killed on May 2, 1995. when his MiG-21bis was hit by AAA near the town of Stara Gradiška during Operation Flash. Flying close to the ground, he ejected at low altitude, but hit the surface of the Sava river before his chute opened.

The present day meet consists of a wide variety of activities, including the aforementioned air program, which was for this occasion to include flypasts by Air Force MiG-21s and Mi-8/171 helicopters, a police and military parachute team demo, aerobatic flights – and light aircraft flypasts, where we come in.

Despite the flying program scheduled to start at 15:00 – with our first takeoff around 16:00 PM – a friend and I arrived at the field early at 9:00, hoping to make ourselves useful in the mean time. The day for one of our airplanes – Cessna 172N 9A-DDD – was packed full in addition to appearing in the flypast, so we came early to prep the birds and start things off as soon as possible. All in all, three of our planes were due to take part in the show: 9A-DDD, 9A-DMJ and our Seneca III, 9A-DMO. 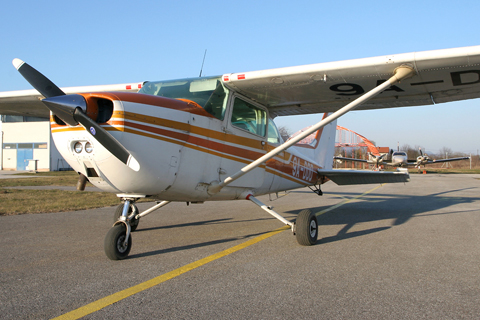 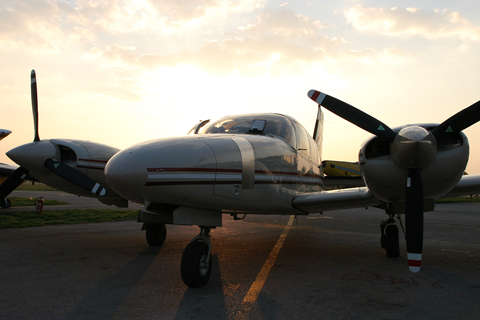 And you’re already familiar with 9A-DMJ from a previous post :).

Since most – if not all – aircraft involved in the meet would be launching from Lučko, I got the opportunity to catch several of them during either practice or departure.  Though most of the types involved would be GA birds, I’ve decided to skip over them – for despite this being a GA blog, I’ll be the first to admit that prepping a C172 isn’t all that a thrilling experience. Much more interesting were the various military and police helicopters that decided they might just catch some air on this beautiful – though humid – spring day.

Normally, an airshow wouldn’t be an airshow if it ran flawlessly :). Due to the way the meet was organised, each participant would be performing solo – which meant that all three of our planes would fly their displays individually and at different times. DDD would be first with a flyover at 16:05, DMJ second at 16:40 and DMO last at 17:55 to close the show. Though it certainly appears a bit nonsensical – having 5-6 Skyhawks pass one at a time over a stadium that was sure to attract a significant number of people – the reason behind it was that the aircraft would get points for being on time over target, points that would be added to their scores in the upcoming precision landing championship to be held at Lučko in two weeks. In the end – as is usually the case – it all went awry quite early in the game :).

As previously mentioned, DDD had a full day in addition to this, with several panorama flights and a banner towing mission stacked end to end. Due to a breakdown in coordination, a skydive flight also appeared out of nowhere, necessitating the use of the more powerful DMJ – which then, by some mechanism that I didn’t quite get, threw the whole plan into disarray. In the end, DDD missed its display slot, but with a quick call to the organisers, we managed to squeeze it in along with DMJ in the latter’s slot. This in the end was fortunate for me, because apart from securing myself a seat on DDD, I’d get another chance for some air-to-air action :). And I desperately needed to get into the front seat of something, as I hadn’t flown for a couple of months and wanted to get my bearings back :).

The route we were to fly is pretty similar to the one we flew in the last Trip Report I posted, but significantly shorter. Gornja Bistra is just behind the Medvednica mountain, a pifling 10-15 minutes away as the Skyhawk flies. After passing Zaprešić – or November point, the exit out of Lučko CTR (I should really post a map here) – just turn right and keep low for the next 5 minutes… and you’re there.

Our departure was scheduled for around 16:20 and surprisingly we made it on time! Given the manageable difference in performance between DDD and DMJ, our formation takeoff was more successful than last time, with DMJ leading the way up until halfway to Zaprešić. There we switched roles and the slower DDD took up the lead.

Unfortunately, DMJ came up on our left, so I couldn’t get a clear shot of it – not through an open window as I had originally hoped. But the short flight time to Stubica – as well as continual communication and sequencing with a provisional ATC unit set up down there – meant we really didn’t have time for fooling around, so I had to make do with what I had.

The event itself was held at a sport stadium, which is quite difficult to find if you’ve never been there before. Even aerial photos with drawn approach and flyover routes aren’t of much help, but thankfully both pilots had been here a number of times before, so it was a relatively straightforward job of lining up for the run. The only problem is that apparently nobody notified the ATC that we’d be coming in formation, so there were a couple of on-frequency changes in lineup to be made.

As we lined up for our run, our formation – predictably I could say – broke up and we ended up chasing each other down toward the stadium, DDD first and DMJ about 100-200 meters behind us (as far as I could see over the tail). Don’t know how it looked like from the ground, but from up here the whole flypast – as well as the next two ones – looked a bit shabby.

Between snapping a few photos and constantly craining my neck and looking for DMJ, I didn’t pay much attention to the rest of the display, but it involved normal flypasts at Warp Skyhawk – in other words, slow :). The presence of numerous hills on all sides of Gornja Stubica percluded anything more aggressive, especially in an relatively underpowered Skyhawk on a hot +25 C day. Our time slot of just 4 minutes didn’t help either, so after our three passes, we set back for Lučko.

After we landed, I harrassed my flight instructor – who was supposed to fly DMO – to hitch a ride on it as well, as the first run didn’t really live up to my expectations. Thankfully, little persuation was necessary, so I found myself in the front right cabin seat at our revised 18:10 launch (I wanted to be up front, but a Seneca-rated pilot from our club was flying the left seat, with my CFI on the right). With four of us aboard and about 3/4 fuel, the takeoff run was more lively than I expected and we were soon off the ground and keeping our heads low toward Zaprešić.

As the traffic around Gornja Bistra had already cleared, we proceeded pretty much straight in, with no holding or orbits – picking up speed along the way for a smashing high-speed low pass.

As is standard for every DMO display, the first pass was followed by a slower “dirty” flyover with flaps and gear extended, while the third – and last in this case – was a surprise low pass from a different direction.

After the third pass – and the impressive-ish climb after it – our work was done, so we set off back to Lučko for another 10 minutes of uneventful flying. The total flight time for this run – calculated from the photo timecodes – was about 35 minutes, bringing the overall time up to 1 hour 15 minutes.