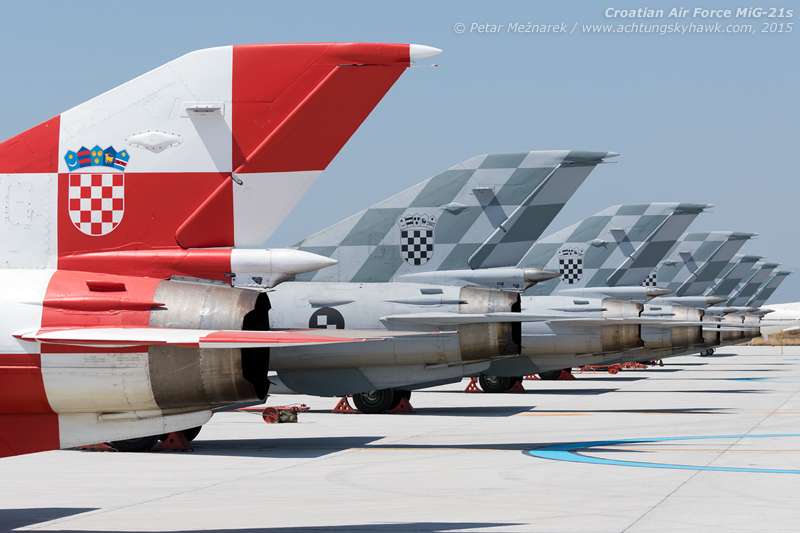 By me
All photos credited and copyrighted as noted

Even though, with all the fine flying weather we’ve been having, one would expect GA to be the talk of the town at Achtung, Skyhawk!, the end of July would see its crown briefly stolen (and in spectacular fashion) by the Croatian Air Force, which had suddenly – and seemingly out of the blue – gone on a PR offensive unseen in recent times 🙂 . While it often finds its way into the media one way or another, the AF had particular reason to be friendly this summer, first having finally completed its reformed MiG-21 force – and then having been given center stage in two major military parades scheduled for the beginning of August.

Wanting to make the best of all three occasions and improve the AF’s somewhat tarnished image, the Ministry of Defense had readily opened up its doors to journalists from all sides, allowing for yet another glimpse at its nowadays rare – but always fascinating – flying machinery… 🙂

The first event off the blocks was the 22 July presentation of the reinvigorated MiG-21 fleet, fully overhauled and bolstered back to full strength by the acquisition of five second-hand examples from the Ukraine in 2013/2014. Now sporting 12 jets in total – four twin-stick UM models and eight single-seat bis variants – the fleet represents the largest concentration of combat aircraft seen here since the 90s civil war, and is slated to remain in service well into 2018 (when it is due to be replaced by a newer Western type). Brought up to partial NATO standard by the addition of a few bits of modern avionics – as well as equipment allowing them to safely operate in civilian airspace – all of the MiGs have been very active ever since cleared for duty, often flying multiple sorties a day, every day… a situation that had been nearly unimaginable during the fleet’s low period in the early 2010s 🙂 .

This renewed disposition – as well as a more relaxed attitude towards conserving the jets’ service lives – has allowed them to be utilized more aggressively and in more roles than before, with at least one flight per day pretty much the norm now. Apart from the obvious training (and photographic 😀 ) benefits, this had also increased the fleet’s reliability in its primary mission – the protection of Croatian airspace – which the MoD was keen to stress during that July morning at Pleso Air Base (ZAG/LDZA)…

NOTE: sadly though, I was prevented by flying commitments from attending myself, relegating my spot to Mr. Petar Mežnarek, a colleague of mine who had previously collaborated with me on another of my MiG-related posts.

Even though the MiGs would be the stars there as well, the second and third events mentioned above would be of a different scope altogether, being based around the 20th anniversary of Operation Storm, a significant military action undertaken in August 1995 during the closing stages of the war. While yearly celebrations of this event are traditionally held on 5 August in the mountain town of Knin – the retaking of which was one of the main goals of the operation – the anniversary had this year also included a mass parade down one of Zagreb’s main streets (held a day earlier on 4 August), for which the Air Force (and even the Police) had been tasked with providing the aerial component.

And while both the original operation and the parade itself remain somewhat controversial in political terms, the latter had nevertheless promised to be quite a spectacle for the photographer, with the AF planning on bringing three examples of each of its aircraft types to the table (with the Police contributing three more machines). However, due to their sheer numbers – with seven types in the AF inventory and three with the Police – the logistics of accommodating them at a single air base had proven to be troublesome, leading to the decision to split them between Pleso (ZAG/LDZA), Lučko (LDZL) and Zemunik (ZAD/LDZD)*, depending on the infrastructure required by each type.

* these seven types also include the AF’s firefighting forces, consisting of the Air Tractor AT-802 and Canadair CL-415. However, due to extensive construction works (and the subsequent lack of space) at Pleso – and the inadequate runway at Lučko – neither could be accommodated at any airport in the Zagreb area, forcing them to operate from their home base at Zemunik, 190 km/103 NM away by the coastal town of Zadar.

Eschewing the parade grounds themselves for some up-close action – and not wanting to let either side down – I’d once again called on Petar Mežnarek for help, with him taking station at Pleso, and me (generally) camping out at my little grass airfield on the edge of town… 🙂

And, as a bonus, a badly-executed ad-hoc video clip from the 2 August general rehearsal, showing pretty much how would Apocalypse Now look like in a Croatian edition 😀 (and which features some whirlybirds I hadn’t been able to photograph in good light, the Air Force’s JetRanger IIIs).