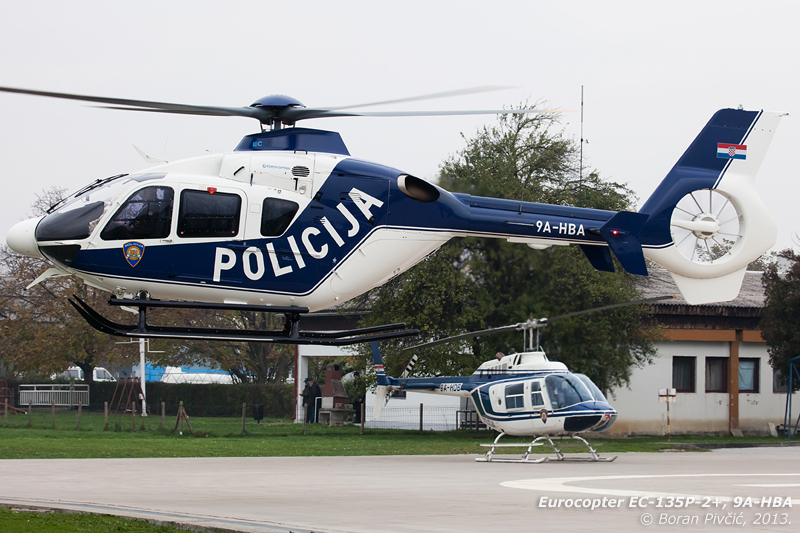 In living proof that the wheels of bureaucracy grind exceedingly slowly, 9A-HBA – the first EC-135 for the Croatian Police – has finally entered active service, more than a month after originally arriving at Lučko 🙂 . The culprit for the delay was, rather unsurprisingly, the mountain of paperwork needed to transfer the machine onto the Croatian register – paperwork that involved cancelling its test reg in Spain, re-registering it in Croatia, sorting out its insurance, airworthiness, maintenance providers, training programs and various other technical and legal procedures (that are, truth be told, common to all aircraft).

Though not yet fully kitted out – an EO/IR (electro-optical/infra red) turret cam being in the works – HBA had nevertheless still played a policing role on its first mission, providing air support for the commemoration of the fall of the city of Vukovar during the 90s civil war 🙂 . 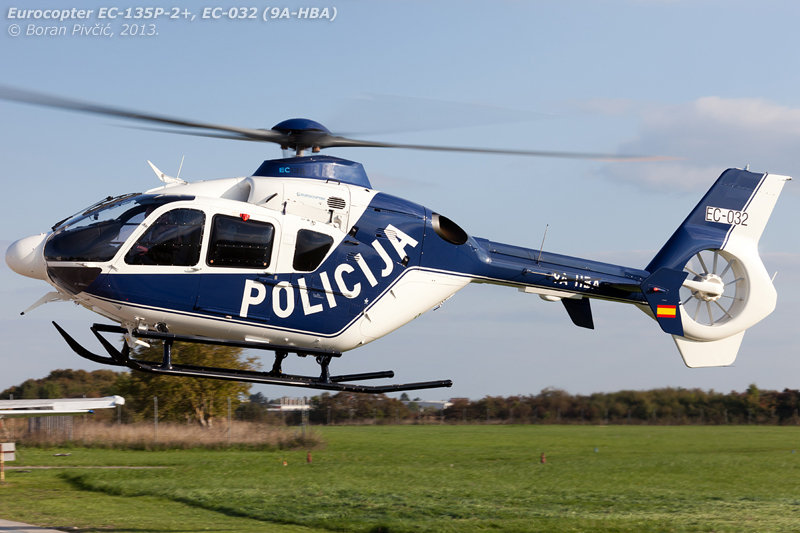 While last year’s spectacular run of rotary visitors at Lučko – including two US Chinooks and Knighthawks, a German Super Puma and EC-155, and the second prototype of the Bell 429 GlobalRanger – had raised hopes for an equally eventful 2013, the cold reality had seen the arrival of only one real highlight. But the lack of quantity was made up for with quality, with the highlight in question finding its way even into the mainstream media (without actually having to crash 😀 ). The machine in question is 9A-HBA, the Croatian Police’s first all-new helicopter in over 20 years… 🙂

Not really an exciting type per se – with droves upon droves plying the skies of Europe – the EC-135 has nevertheless signaled a small (but significant) shift in the local helicopter community. Having inherited all of its hardware from former Yugoslavia, the Police had ended up being a staunch operator of Bell machines since the early 90s, flying a handful of JetRanger IIs and IIIs – as well as single, and much loved, Twin Huey – till this day. The arrival of HBA – whose acquisiton was sponsored in part by the EU – has broken Bell’s two plus decade long dominance in force, becoming the first Western European helicopter ever to be operated by any Croatian government agency 🙂 (with all the perks and ramifications attached).

While its shiny & clean exterior would suggest a new-build frame, HBA was actually completed back in 2008 and originally intended for service with Spain’s Guardia Civil, where it was briefly known as HU.26-15. However, soon after completing its validation and acceptance flights, it was – for various complicated reasons – mothballed and placed into long term storage. As there was no foreseeable need for it in Spanish service (having stood unused for five years), it was put up for sale, eventually finding its way into Croatian skies :).

With just 20-odd hours on the clock – most of which were incurred on the ferry flight from Albacete – HBA will be primarily used in the border patrol role, where it will eventually be joined by two additional examples (one of which is already on the books). Given their twin engine nature and full IFR avionics, these three machines will also likely become a replacement for the aforementioned 212, which is slowly nearing the end of its useful life after several decades of hard graft… 🙂