Having always been on Team Gulfstream when it came to range-topping business jets – and living in a touristy country where the rich and famous (used to) come to let off some steam – I naturally had plenty of opportunity to enjoy the many fine forms of the Big Gulf. Down at the coast the G-IV, G-V and latterly the mighty G650 were as common as trees, and there was virtually no seaside airport without at least half a dozen of them at any one time.

However, the “older gentlemen” of the family – the original G-II and G-III – had continually eluded me, and several years came by and went until I finally managed to snap one. Making the same mistake as before, I kept thinking “well, that’s it, I’ve seen one now and never again”… right up until they started appearing in measurable numbers all over the place, including – very conveniently – at my base airport, Zagreb Intl (ZAG/LDZA)…

The first one off the bat is a mint 1982 G-III with the serial 460, owned by the basketball world’s own Magic Johnson. Since I do not watch sports, I cannot comment on Mr. Johnson’s professional career; but he is very obviously a man of culture, since – despite everything – he chooses to own an “oldtimer” that’s so loud it has to be silenced by law!

It may be plain while and surrounded by newer, fancier & flashier birds – but N32MJ nevertheless manages to dominate the GA apron with ease!

While these large cabin jets tend to lead comparatively simple and quiet lives, N32MJ has a history that can rival any MD-80: by my count, it had carried 10 separate registrations and passed through the hands of 12 different owners! (the full list can be found at Plane Logger) What is interesting for us here and now is that in 2005 it would pass from jet legend Clay Lacy to court legend Magic Johnson, with the intervening 15 years representing by far its longest stint with a single operator…

So, while this particular airplane probably has quite a few stories to tell, the G-III as a whole has a good one too. While it sometimes takes a keen eye to tell it apart from other members of its extended family, the III is probably the definitive landmark Gulfstream, since it was the one to set the stage – in terms of performance, comfort and style – for all the models that came subsequently. To make it even better, its glorious shape – delicate, elegant, powerful and brutish all at once – actually has its roots in a – turboprop 😀 .

And while the very mention of the P Word may raise a few eyebrows, the machine in question is probably one of the most beautiful t-props of them all: the dashing and elegant G-159 Gulfstream. Grumman’s attempt to offer the business market something better than a converted WW2 light/medium bomber, the G-159 was on its debut in 1958 one of the world’s first purpose-built large executive aircraft, sporting a comfortable and pressurized cabin for 8-24 passengers* (w/ the type’s famous oval windows), an advanced flight deck, transcontinental range and a pair of very loud – but also very tough and reliable – Rolls-Royce Darts rated at 2190 HP each.

* according to many of the sources I found, the voluminous cabin allowed for numerous configurations with large differences in total capacity. The most luxurious setup seated only eight; the Sardine Can Special could squeeze 24; while the most common variant had space for 10-12. There was even a version called the G-159C (five of which were built), aimed at the regional airline market; a 3.25 meter fuselage stretch brought the total capacity to 37, roughly equal to the much later DHC-8-100

By the mid 60s though, the rise of the business jet could not be ignored anymore; names such as Lockheed JetStar, Rockwell Sabreliner, Dassault Falcon and Hawker-Siddeley HS.125 had grown into a credible threat, which meant that the G-159 could not hope to compete for much longer solely on its superior capacity, fuel economy and airfield performance. To stay in the game, Grumman decided to build on the 159’s success and turn it once more into the ultimate business transport. To that end, in 1966 they took its entire cabin and forward section (including the nose gear), stuck on a bespoke swept wing w/ increased fuel capacity, a rakish T-tail, and a pair of howling Rolls-Royce Spey low-bypass turbofans in the back (still a quieter fit than the Darts!), thus creating the daddy: the G-1159 Gulfstream II**, the first jet Gulf.

** on its introduction, the G-159 – which would remain in production for two more years – would be renamed into Gulfstream I

While a quantum leap in performance over the G-I – being the first bizjet to cross the Atlantic non-stop – by the mid 70s the G-II was itself becoming a bit dated, and would soon start to face some worrying competition from (among others) the upstart Canadair Challenger – the first modern large cabin jet designed from the ground up for the business role. In reply, Grumman would in 1979 take the G-II and:

and christen the result the G-1159A Gulfstream III. Despite having sold only a modest 202 examples, the G-III was such a conceptual hit that it immediately set the standards for what a proper Gulfstream should be (despite its inefficient and gas-guzzling engines).

Indeed, the hugely successful 1985 G-IV – more than 900 sold over multiple versions – is actually a lengthened G-III with a tweaked wing, a full glass cockpit and power provided by modern Rolls-Royce Tay high-bypass turbofans. Even the G-V of 1995 shares the same DNA, being a longer, fully re-winged G-IV powered the brand new Rolls-Royce/BMW BR710. Only with the coming of the clean sheet G650 did the old G-II/III finally decide to lay down and die…

Despite the “Eurowhite” paint job (which is actually new), N32MJ does carry a few tokens of Mr. Johnson’s sporting life: his old basketball team on one side… 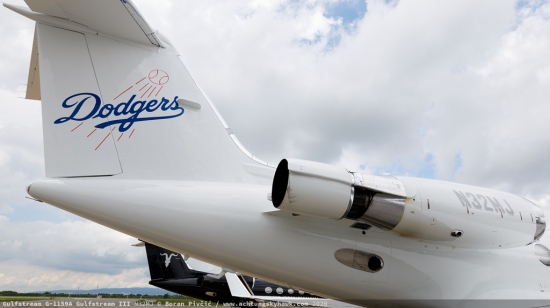 … and the baseball team he owns on the other

There’s just something about a quarter side view of a classic Gulf… interestingly, N32MJ was parked at Zagreb immobile for approximately two weeks while Mr. Johnson was down on the Adriatic coast, despite an abundance of airports that could (and had the space) to accommodate a G-III…

You know your airplane is good when it needs a muzzle. For those unfamiliar with them, “hush kits” – seen here at the back of the engine – are aftermarket air mixers fitted to older generation low-bypass turbofans to reduce their noise signature. They work by providing additional mixing of outside air and exhaust gases, which reduces the shearing forces between them that are the main cause of “jet engine noise”. In many Western countries, they are nowadays an essential piece of kit to even get in. The units fitted to N32MJ are QTA Stage 3 models, by far the most popular choice for Spey-powered Gulfs (of note, the gap between the engine and mixer accommodates the reverser buckets when open) 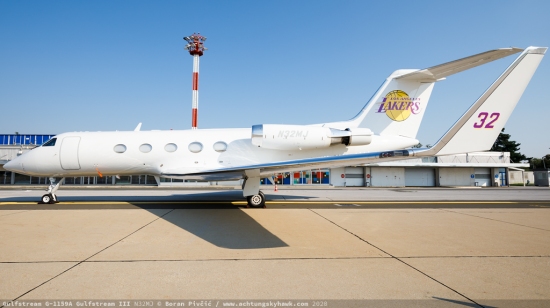 Rarely are there aircraft whose looks combine characteristics that are so different: elegant, but brutish… delicate, but powerful… discreet, but imposing…

Just as the G-III’s advancement carried forward onto the G-IV, they also filtered backwards onto the old G-II. In 1981 – a year after its production ended – Gulfstream offered the G-1159B Gulfstream II-B upgrade, which would see the III’s wing and cockpit setup mated to existing G-IIs (the only other factory variant of the II was the G-II-TT, fitted with tip tanks; only 18 are known to have been so equipped). Offered until 1987, 44 machines had been converted to this standard – including our example, the non-hush-kitted N4NR. 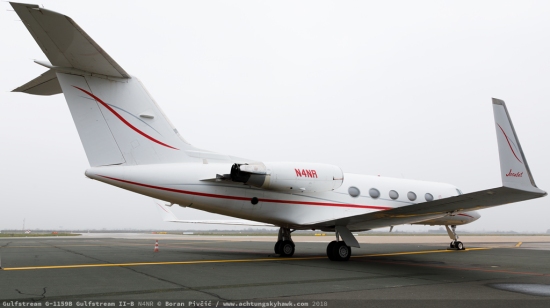 Lost in the mist and overcast. To see a G-II in the 21st century is something… to see one WITHOUT hush kits is a different matter entirely!

Completed in 1978 under the serial 255, this odd bird had started out in life as N442A of the Aramco Steel Corporation. In 1984, it would pass into the hands of Rockwell International, where it would soon become N4NR – and, presumably, be converted to the II-B standard. It would stay with Rockwell’s various incarnations all the way until 2001, after which it would pass through the hands of several venture capital corporations (list also at Plane Logger), finally ending up with the somewhat cryptic Global Mission LLC in 2008.

That all was not going well in its world became obvious in November 2018, when its first (and last) arrival into Zagreb was met with a pre-planned sting operation ran by the Croatian Police, acting on information provided by the US Drug Enforcement Agency (DEA). Though some of the details are still not entirely clear, official press releases stated that the crew of two were flying in from Mali with a kilo of very pure cocaine, a sample of the payment to local arms dealers for a shipment of Soviet-era man-portable anti-aircraft systems, assault rifles, ammunition and other military gear – all stuff that was scheduled to be passed onto a Malian Islamist terror group.

Immediately impounded as evidence, it now sits sealed in the corner of the GA apron, awaiting some future auction where it would be sold off to whoever cares. Informed opinion suggests that it’ll probably end up on the scrap heap, since it is in pretty poor condition*** – and the costs of returning it to airworthy state and bringing it up to code are not encouraging…

*** indeed, it has been mentioned informally that is had started out for Zagreb three previous times before returning back to Mali with technical issues 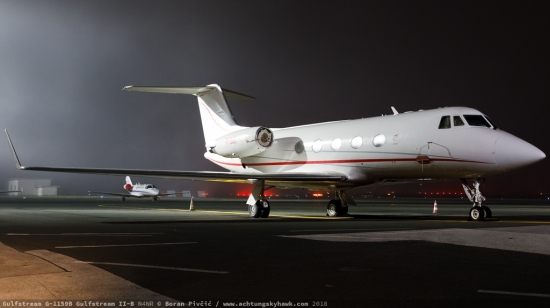 While you’d be hard pressed to tell it apart from the G-III from most angles, the dead giveaway is the old G-I-style nose. While it is very cool in its own right, it almost looks like the G-IIIs rural cousin…

Jumpin’ Jehoshaphat? More like Forgotten Jehoshaphat! In 2020, N4NR would be moved to the far end of the apron (to a spot just under its horizontal stabilizer) and left to the elements…