Photo Report – I have nothing to offer…

… but sweat, dehydration, sunburn and flight hours 😀 . Okay, Churchill may not have had the spring/summer flying season at Lučko in mind when he uttered his famous phrase back in 1940, but in this custom form it does go a long way to describing events at the field these past few weeks 🙂 . With out traditional summer anticyclone parked very firmly over the entire region, we’ve been graced with fantastic flying weather for days on end, allowing out entire fleet to go out and stretch its wings. And while the temperatures did let the side down – with 40 Centigrade on the apron not even being newsworthy – we’ve nevertheless persevered, allowing me to bring you another photo series of life in Croatian GA (and beyond)… 🙂 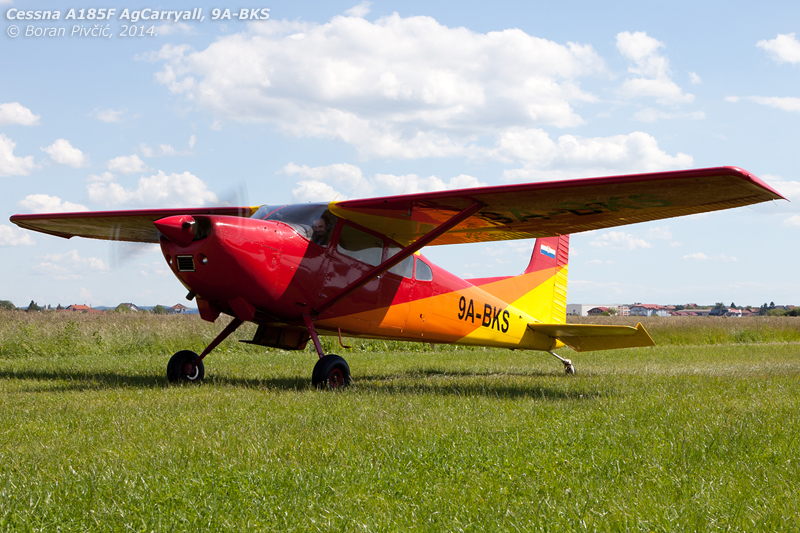 The Carryall in its element: on grass under sunny skies on a beautiful spring day. An aircraft with a rich history in the country, BKS was produced back in 1977, entering service with local operator Pan Adria the same year. Used for tailwheel conversion training and crop dusting, it would pass to the Viša zrakoplova škola flight school a few years later, where it would serve as an IFR trainer. Following the school’s collapse in the late 80s, BKS would end up in the fleet of Aeroklub Zagreb, where it was stripped, lightened and turned into a skydive aircraft – a role it fulfills even today. An interesting personal detail is that this aircraft seems to follow my family around, starting with my dad who used to work in Pan Adria, mom who used to work at Viša zrakoplovna škola – and me currently flying it on behalf of AK Zagreb. 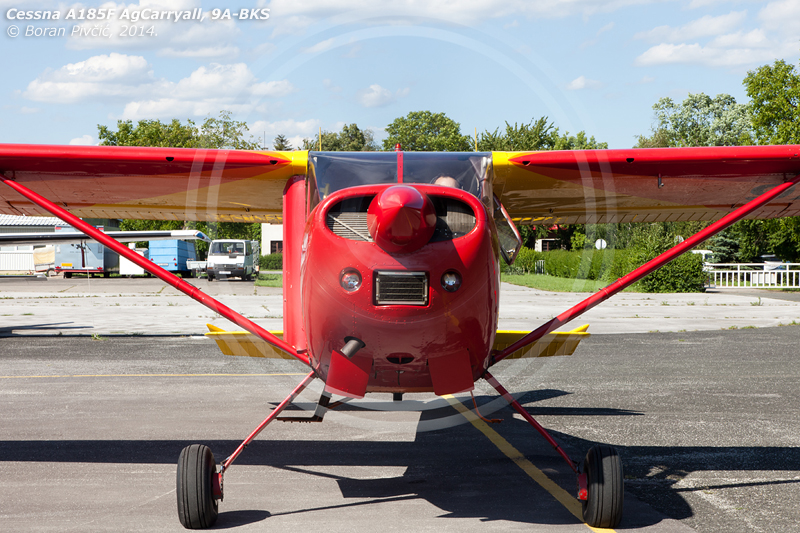 Another look at our charismatic fuel-to-noise converter. Powered by an 8.5 liter/520 cu in engine developing 300 HP and whirling a 208 cm/82 in diameter prop – which is well into the transsonic region on take off – BKS is not the most conspicuous machine around, and can – during favorable winds – be heard all the way to the center of Zagreb, some 10 km/5 NM away… 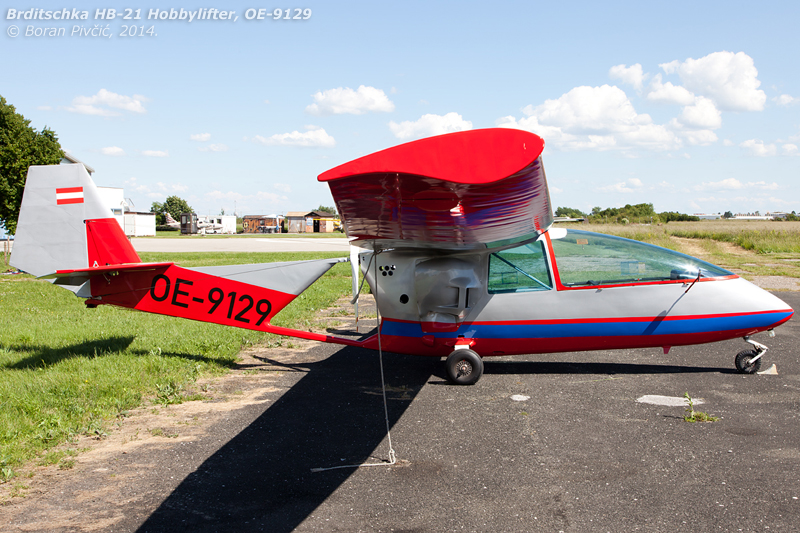 Definitely one of the more interesting aircraft I’ve come across over the years! Sporting an unusual configuration for what is essentially a motorglider, the HB-21 is quite the performer despite its frail looks, easily rivaling the Piper Super Cub in the climb. Indeed, OE-9129 was bought specifically to replace PA-18 9A-DBU in the glider tow role, with trials revealing it’s more than a match even when hauling a heavy glider such as the Let L-13 Blanik… 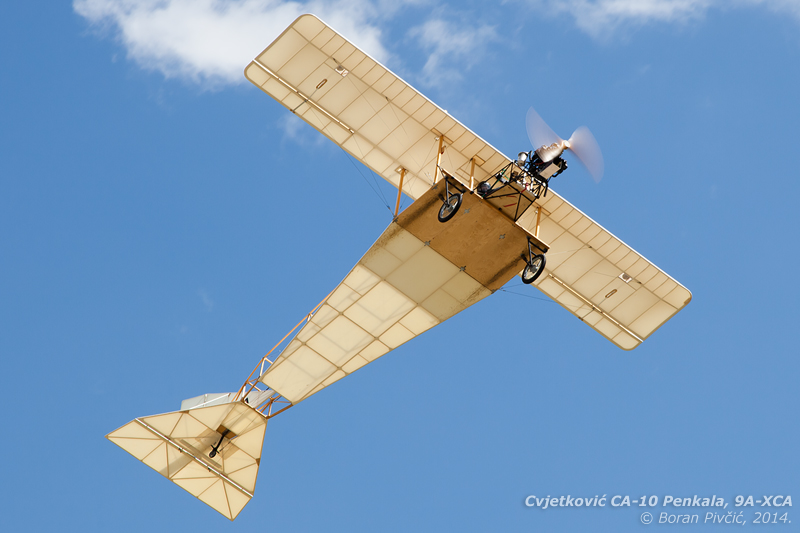 A scene straight out of WW I as one of Lučko’s most famous residents flies leisurely overhead. Lovingly crafted over a period of several years – mostly out of materials found in hardware stores – XCA is a modern replica of the first proper aircraft built in Croatia: the P-3 of 1910 (designed by inventor Slavoljub Penkala). Not exactly a one-for-one replica, the CA-10 includes a host of aerodynamic improvements to make it easier to fly, as well as a modern 80 HP Rotax 912ULS in place of the extinct Laurin & Klement inline.

The (mostly) fine weather had also lured out the air force, allowing us to play a bit of spot the differences! Even though they are essentially the same aircraft underneath, the legacy Mi-8MTV-1 and the modern Mi-171 do diverge in a number of details – the most obvious being the 171’s flat rear ramp. Other more subtle changes include the additional forward fuselage door – which had necessitated the relocation of the aircon unit to the top of the fuselage – and the Doppler Navigator antenna array moved further back down the tail boom. Intended to also provide at least some of the capability of the country’s long decommissioned Mi-24 fleet, the 171s also sport some additional combat equipment, including bolt-on armor plating around the cockpit, flare dispensers (above the CroAF roundel on the rear fuselage), IR jammers (at the back of the gearbox assembly) and provisions for carrying up to four B8V unguided rocket packs. 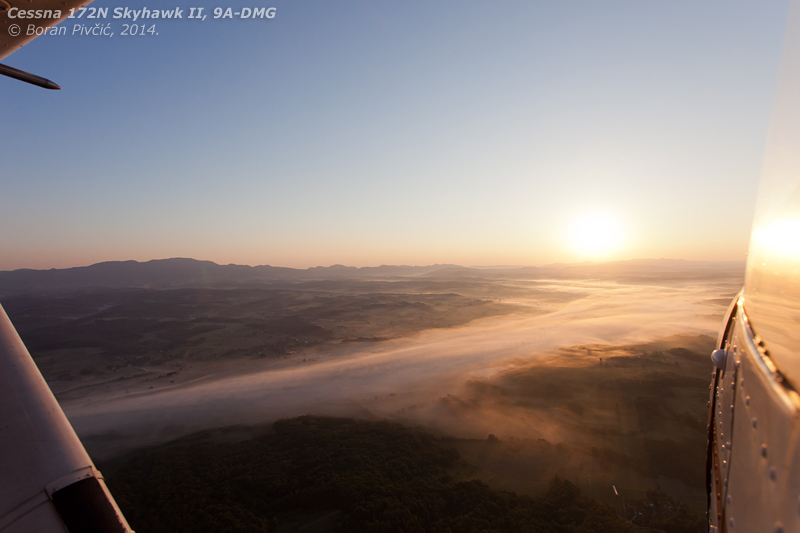 Reasons for getting up at 4 AM to go flying: here’s #1… beautifully smooth air, absolute quiet on the frequency, an agreeable 26 Centigrade aloft – and a fantastic view of sleepy Zagorje as I ferry DMG to Varaždin for servicing at 5:30 AM.

Even though it is relatively busy even at the worst of times, on this morning Varaždin appeared to be host to a mini Cessna convention, with seven 172s, one 182 and one 210 lining the main taxiway and apron. The culprits for this threefold increase in Cessna numbers were the seven 172s from Bulgaria and Serbia, in country on a fox immunization contract and for the time being operating out of Varaždin… 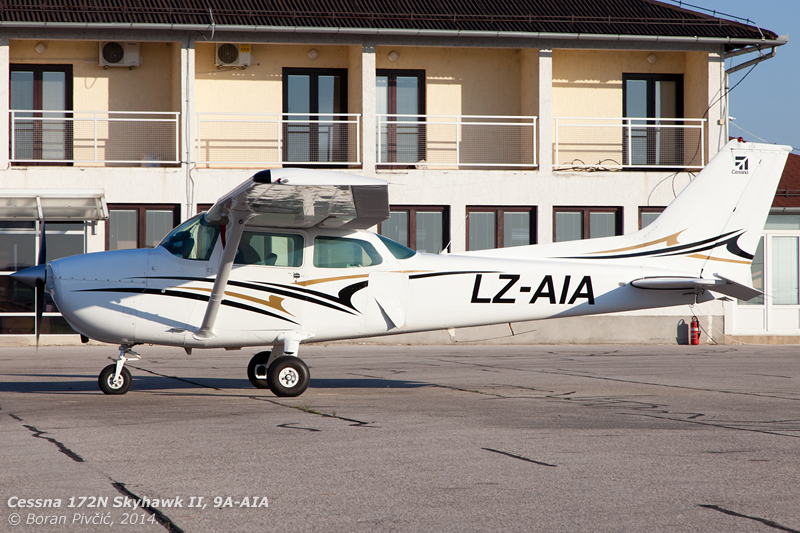 Easily mistaken for a brand new Skyhawk SP, this mint 1978 172N is seen rolling gently towards the main hangar for some minor maintenance. Part of the aforementioned Bulgarian-Serbian fleet, AIA is equipped with a bare bones interior and a special pellet dispenser in place of the regular baggage door. In immunization operations, the aircraft is manned by a crew of two, with the second member manually feeding the dispenser with pellets from chilled boxes (kept overnight in a refrigerated truck trailer).

One thought on “Photo Report – I have nothing to offer…”