With the weather finally turning for the better, I have come once again to the point where my (admittedly limited) flying duties see me visiting Pleso Airport (LDZA) on a near-daily basis (not that I’m complaining! 😀 ). The upshot of the situation is that my camera invariably visits with me, which – combined with generous apron access – often makes for some good and exciting photography. As I’d explained previously in another post on this very topic, Pleso’s status as the default gateway to Croatia is a surefire guarantee that something interesting will pop in every once in awhile, whether it be a heavy freighter, a fast military jet, or an unusual little prop 🙂 .

And while 2014 has so far been somewhat of a slow year for Achtung, Skyhawk!-worthy aircraft, a few oddballs have nevertheless flown in, providing me with enough material to satisfactorily continue this photo series… 🙂 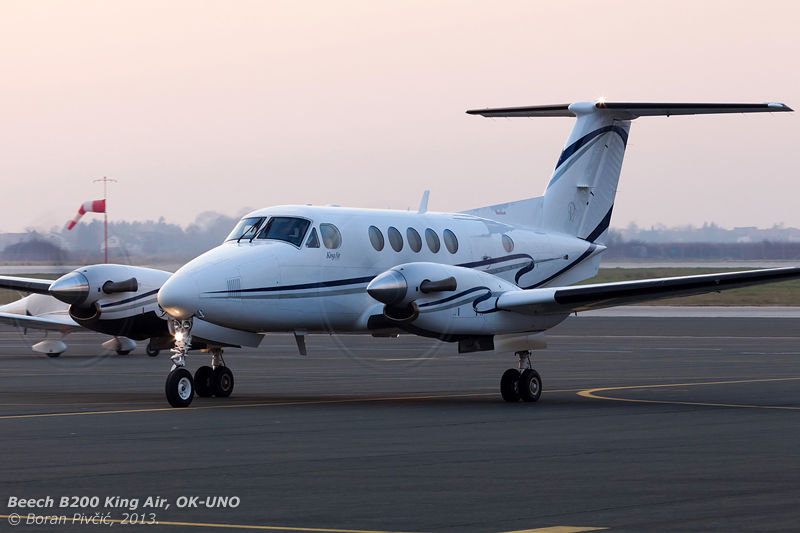 Another medical flight rolling in with the last light of day. In town to pick up a donor organ urgently needed for transplant somewhere in Europe, OK-UNO is part of a steady stream of similar flights arriving into Pleso throughout the year. In addition to “pure” organ transport, many of these also fly out people seeking medical treatment abroad – flights that are on the up since Croatia joined the EU in July 2013.

One of the absolute highlights of the year so far is seen diving for RWY 05, flying in a volleyball team for a local championship. A lengthy – and hopefully educational – description is provided below!*

* definitely one of the most interesting aircraft to have come out of the Antonov works, the An-74 is an upgraded, Arctic-capable version of the An-72, both of which owe their unconventional looks to the application of the so-called “Coandă effect”. Named after its discoverer – Romanian aerodynamicist Henri Coandă – this effect describes the tendency of a moving gas to follow the shape and form of the surface it is flowing against. Recognizing its potential to drastically reduce an aircraft’s minimum approach and landing speeds, Antonov had in the mid-70s decided to implement it on an actual aircraft – the An-72 – in which the engine exhaust gasses flow over the flaps and inner sections of the wing, increasing their generated lift without necessitating an increase in flight speed (Boeing had applied the same principle on its YC-14 – an aircraft roughly identical in shape and function, and created round about the same time). Originally conceived as pure-blooded military transports, the An-72 and 74 would eventually also evolve into a number of passenger models, the first of which was the An-74TK-200 pictured above. Interestingly, the design had also served as the springboard for the modern An-148 and 158, which were derived from the visually nearly-identical An-74TK-300.

Sitting clean and pretty at the end of another fine winter’s day. Owned by Geofoto – a well-known local aerial imaging company – DOF had actually spent the last year or so on the ground due to various financial issues, with its only movement having been a tow from one side of the airport to the other. Said to be up for sale, the aircraft had been spruced up over the course of the winter – and even ran for a few minutes to clear the proverbial bats out of the engines. 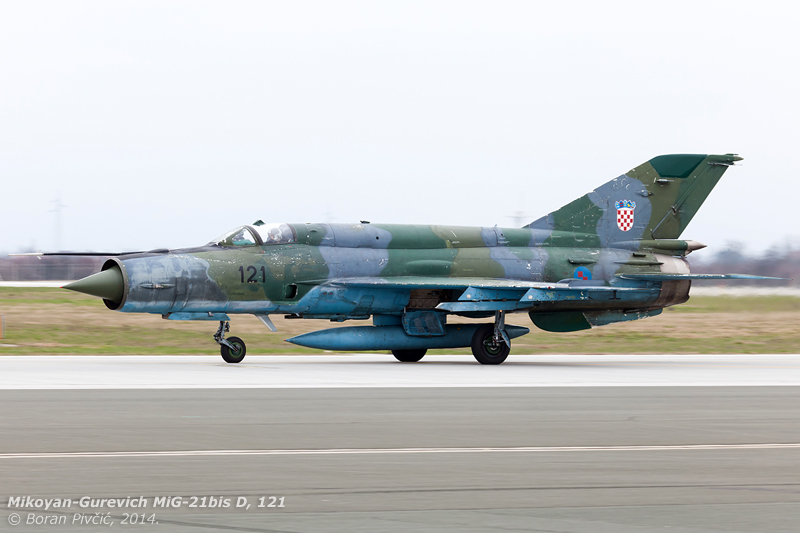 A welcome sight and sound as “Knight 01” rolls briskly towards RWY 05 for a one-hour sortie. Looking worse for wear every time I see it, 121 is one of the last Croatian AF MiGs still in something resembling an operational status, with the rest of the fleet currently undergoing servicing and overhaul in the Ukraine. As part of the current QRA pair, 121 would normally be armed with two R-60 (AA-8 Alphid) heat-seeking missiles – but was on this occasion flying empty, with only the missile pylons in place…

A selection for all tastes and wallet sizes: the modern Challenger 300 for “medium haul”, the timeless and elegant Falcon 50 for transoceanic hops – and the humble, cheap Mustang for popping over the border for a coffee. While not nearly as sizable or impressive as those seen across Western Europe, this little fleet – which had also included three more Citations out of shot – is definitely a sight to behold at Pleso…

Even though the traffic situation the following weekend was not as varied as the one pictured above, one could still stumble upon some interesting machinery on the GA apron! One of the rarest bizjets around, the Citation VI was developed as a cheaper, softer version of the original Citation III, Cessna’s first swept-wing jet. Intended to offer solid performance and operating costs to the lower end of the market, the VI ended up being a huge sales flop, with only 39 examples made before production ceased in 1995… the first one I’ve ever seen up close, PH-MFX is operated by Holland’s Solid Air and is I believe one of just a handful of examples flying in Europe.