Photo Intermission – A Short Hop On A Short Boeing

On the face of it, 2011 hadn’t really gotten off to a flying start as far as local GA photography was concerned. Stuck in Limbo between an airfield that is closed and an airport that is – for all intents and photographic purposes – inaccessible, I was growing exasperated by the need to photograph something, anything, to satisfy my current bout of photography fever 😀 (like cabin fever, but more expensive!). However, a couple of weeks ago – as I was contemplating increasingly drastic measures for getting a few snaps in – I’d gotten some unexpected news: one of my best friends was getting married, and a couple of us from Zagreb were invited to his hometown of Warsaw, Poland for the wedding ceremony :). Apart from the fact that I’d finally see him after six long years, this had also implied a plane journey or two, which was just what the doctor had ordered! 😀

Much to my delight (and in a textbook case of misplaced priorities), I’d soon discovered that there were no direct flights between Zagreb and Warsaw during the winter, necessitating a stopover and plane change somewhere in Central Europe :D. What on any other occasion would have been a mild annoyance had this time become a chance to catch something rare and interesting among the dull and common ATRs and Airbii operated by ČSA, the Czech carrier we’ve chosen as our wings to the north :). And I was not disappointed: for waiting for us at the gate at Prague airport was a lovely little 737-500…

The last of the 737 “classics”, the 500 series is relatively a rare sight today, having never been much of a sales success in the first place – only 389 were ever made over a decade-long production run. Essentially a modernized 200 series (incidentally, the only other 737 variant I’d flown on 🙂 ), the 500 was upgraded with technologies seen on the preceding 300 and 400 series, most notably quieter and more efficient CFM-56 turbofans and a modern EFIS cockpit setup. Other improvements had also included increased fuel tankage for greater range and a few performance tweaks here and there, which had made it an altogether more capable – but not aurally as pleasing 😀 – aircraft than the basic 200 (the 500 would later also give rise to the 600, a further upgrade with goodies from the NG series – but that would suffer an even worse production fate).

However, while it had made sense during its debut in the late 80 and early 90s, the 500 would soon start to run up against increasingly stiff competition from the nascent regional jet. Carrying around 110 passengers (depending on configuration), the 737-500 was just too much of an aircraft for the capacity it had offered, rendering it uneconomical for all but a handful of operators who had the specific requirement for a low-capacity jet with extended range. The upgraded 600 – of which only 69 were built – had further underlined the variants’ newly-acquired “niche aircraft” status…

But the above was not the only thing that had made OK-XGD – “my” 737-55S that day 🙂 – interesting. As well as being among the first 735s flying in Europe (delivered in mid-1992), I believe it is also the second-to-last aircraft delivered to the old ČSA (Češkoslovenské Státní Aerolinie or Czechoslovak State Airlines), before the dissolution of former Czechoslovakia on 1 January 1993 – and is, along with Lufthansa’s examples, part of the the only 735 batch still flying with its original operator since delivery :)…

Leaving daylight behind as we cruise eastwards over Poland at 34,000 ft 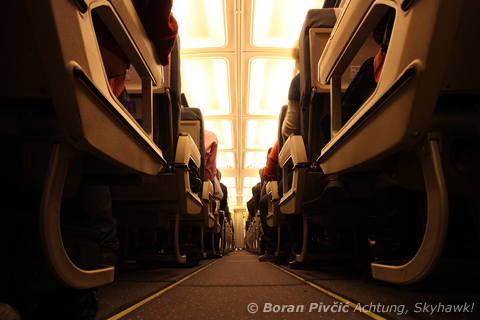 Seated right in the last row (row 29) I had a commanding view of the cabin... which I naturally decided to put to good effect :D. And while the cabin itself is clean and tidy, its dated design - especially the overhead passenger lights and vents - gives away the aircraft's age 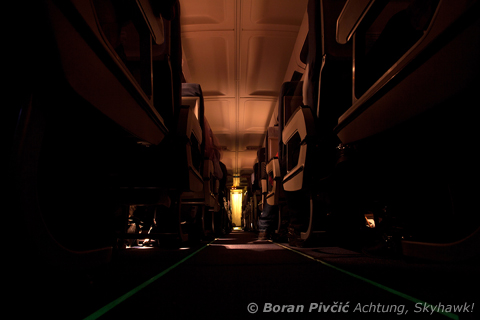 All calm and quiet as the cabin crew dim the lights for landing at Warsaw. I had dearly wanted to nag a visit to the cockpit, but the short duration of the flight - just a tad over 45 minutes - meant we just had time to climb, help ourselves to the drinks cart, and then prepare for arrival 🙂