By a stroke of good luck – and through the perseverance of my spotting colleagues – our little spotting group had managed to break into the mainstream media today :). Nothing really unusual out in the civilized world, but getting a four-minute time slot – on national television no less – for a “marginal” hobby can be considered quite an achievement here. Consequently, we were to gather at Pleso airport with all our gear and be filmed enthusiastically taking photos from the airport’s normally closed observation deck, opened just this once especially for us… 🙂

Now, normally I don’t photograph “standard” airliners, being a staunch member of the “when you’ve seen one A320, you’ve seen them all” school, but given that this was for the benefit of the group, I decided to try and make the best of it. Pleso does occasionally get a few gems (KC-10s, the odd CC-150 Polaris, Il-76s and the like), so hoped that something obscure might be in town today too…

But soon we ran into a problem – being a slow morning on Easter weekend, there wasn’t really much to photograph full stop, with a whopping six airliners and two movements in the hour we were there. Nevertheless, with the press eager to get it over with, we set to work :).

First on the list is this brand new Croatia Airlines Dash 8 Q400 :). Registered 9A-CQF, this is the company's sixth Dash and had - according to photo evidence - arrived just one or two days ago along with sister ship 9A-CQE :). Continuing with the tradition of naming turboprops after the county's regions, QF in named "Primorje" for the northern coastal bit of Croatia 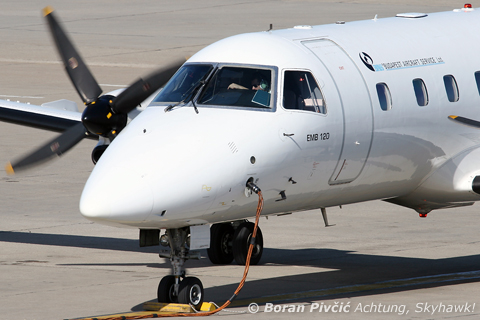 Making up for the lack of traffic, I at least got to see my first ever Embraer Brasilia :). Operated by Budapest Aircraft Service - BASE - on behalf of Hungary's national carrier Malev, HA-FAL is seen firing up the No.2 engine for its short hop to Budapest 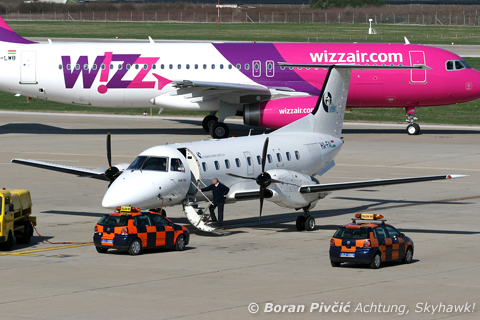 What a crowd :). Both of the morning's movements captured in one shot - and both registered in Hungary. HA-LWB is seen taxiing out for a RWY 23 departure to... somewhere

Having only to maintain runway heading pretty much all the way to Budapest - and with a light 3-knot south-western tailwind - HA-FAL decided on a RWY 05 departure. With the airport terminal positioned right by the RWY 05 threshold, this suited us well 🙂 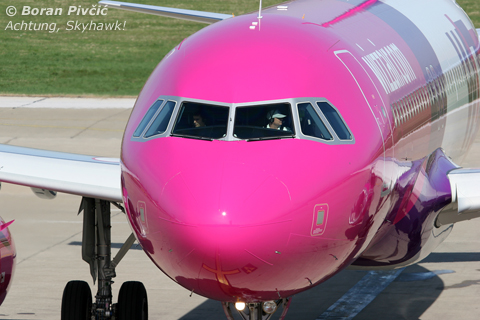 If I were in a bit of a mood right now, I'd take a stab at the Airliners.net forums and raise a fuss about "how is the captain flying with a baseball cap?! That's unprofessional!" 😀

HA-LWB's No.2 IAE V2500 spooling up for departure. Too bad I didn't lower the shutter speed a bit further...

Outright the most interesting aircraft that morning was this Egyptian-registered A300B4 freighter. Looking cool and clean, this is the old 200 series (specifically a 203(F) ), still sporting a flight engineer and fully analogue cockpit - an increasingly rare bird in the skies of Europe. Another interesting aircraft is to the left, Farnair's freighter ATR-72 🙂