By me
All photos me too and copyrighted

On my way back from Korenica, I had decided to stop at the abandoned Željava military airfield some 20-30 km away. I’ve always wanted to go there and now I was in the area, so what harm could a quick stop do. Quick, because 1. the weather was awful and 2. I wasn’t really prepared with maps, charts and a passport… but that’s another story, one which I will hopefully write soon, with many juicy photos :). In the meantime, I had wanted to bring you a couple of photos of one poor old classic bird I’ve found there – a nowadays rather rare B model of the venerable C-47 Dakota.

The C-47B was something of a niche model in the Dakota line, produced for one thing only – flying across “The Hump”, the western ranges of the Himalayas on the often perilous WW2 India-Burma supply route. To enable to it cope with the high altitudes and longer distances, the B was uprated with supercharged Pratt & Whitney R-1830-90 engines rated at the same 1,200 HP as the normally-aspirated variants, and additional fuel capacity. During WW2 they mostly served with the USAAF, while some were also transferred to the US Navy, where they served under the naval designation R4D-6 for cargo variants and R4D-7 for navigation trainers.

With the rapid downsizing of the Allies’ air forces after the war, many C-47s were disposed of at dirt-cheap prices, with the Socialist Federative Republic of Yugoslavia snapping up a few to complement it’s existing Lisunov Li-2s (DC-3s built under license in the USSR) and Li-3s (Yugoslav Li-2s re-engined with the DC-3 line’s original R-1830 engines). As far as I’ve been able to find out, most of these C-47s were B models…

One of these is our example, coded 212, so far the third ex-Yu C-47 I’ve been able to find (the others being at Otočac airfield and Belgrade airport). By the looks of it, it had been sitting here for quite awhile and is – according to a sketchy, Eyeball Mk.I analysis – beyond any reasonable repair, especially given that there are many other C-47s/C-53s/C-117s/R4Ds in better condition… 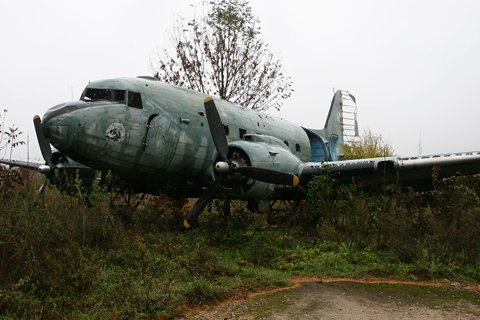 Dumped, damaged and forgotten, hidden out of everybody's way... the low cloud ceiling and drizzle fit the picture perfectly

The classic C-47 shape in drab green still looks good even in this bad a state. The fabric covered control surfaces were the first to "go", while the rest of the structure seems to be holding on still 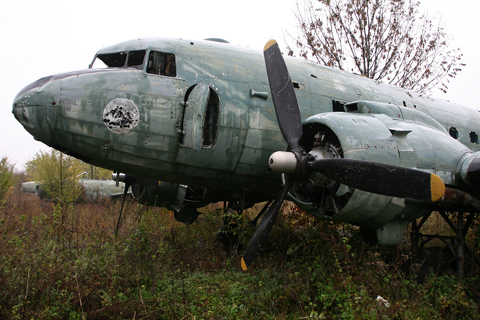 Riddled with bullet holes and chalked full of nationalistic graffiti, 212 is a reminder of the region's violent past. Situated in an area that saw considerable fighting during the Balkan Wars of the early 90s, Željava was destroyed in 1992 by retreating Yugoslav National Army forces. Useless as an airbase anymore, Željava saw some see-saw advances by various armies, which all left their mark on whatever was left on the base... out back, two Republic Thunderjets keep 212 some company as the elements do their work

Seen just peeking through the foliage... the Thunderjets are quite a nice historical oddity. Despite being a socialist country, ex-Yugoslavia was one of the founding members of the Non-Aligned Movement, rejecting "membership" in either bloc. But being squeezed right in between them, in the immediate aftermath of WW2 both blocs vied for it, with the West upping the ante by supplying some first-generation combat jets, including a large number of North American Sabres. In the civil world too, JAT - the country's flag carrier - was the only European socialist state-owned airline to continually operate an all-Western fleet (Caravelle, B727, B737, DC-9, DC-10, ATR-42/72)

And, as an added treat on the side, one photo of the Belgrade-based C-47B 214 :). Part of the Aeronautical Museum at Belgrade's Nikola Tesla/Surčin airport, this is the best-preserved of the three

(the third Otočac-based aircraft I still haven’t photographed, but here are some shots from Airliners.net: