By me
All photos me also
Driving me across the whole field Dean T.

Looking to profile all the interesting aircraft at Lučko, I keep passing over one that has almost become a permanent fixture of the field, pretty much part of the landscape. Despite being huge, we’re so accustomed to seeing it in the distance that we don’t pay it much (or any) attention anymore – which is a shame, since it’s a very interesting and nowadays rare piece of (formerly) flying machinery. The subject is, of course, our old white whale, RA-21132, a Mil Mi-6 heavy transport helicopter.

Once the largest helicopter to see mass production and regular service, the Mi-6 is an imposing and awe-inspiring aircraft from any angle, today beaten only by it’s more powerful and modern brother, the Mi-26. Powered by two Soloviev D-25V turboshaft engines delivering 5,500 HP each, the Mi-6 weighed in at an astounding 42,500 kg at maximum takeoff weight, equivalent to TWO Dash 8 Q400 70-seat turboprops (or one 90 seat DC-9-10). At its cruise speed of 250 km/h – a not at all shabby 135 kts – it could haul 90 passengers or 12 tons of cargo over a distance about 600 km. Normally this was put to good use, and the Mi-6 was over time produced in a number of versions, including electronic warfare, airborne command post, anti-submarine, firefighting, SAR and AWACS models among others. However, the Mi-6’s most famous use was during the ’86 Chernobyl nuclear powerplant disaster, when several aircraft were used to douse the still-burning reactor core immediately after the accident. Irradiated and now useless, they were dumped in the Chernobyl vehicle graveyard and can be easily seen using Google Earth. 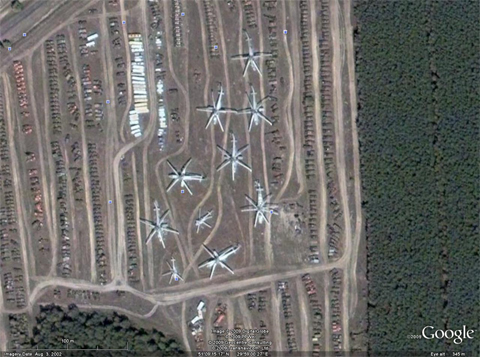 Not at all bad for a machine first flown in 1957, just 17 years after Igor Sikorsky demonstrated the single-seat VS-300, the first helicopter that actually worked and flew like the helicopters of today. Even today it’s rotor and gearbox system components are considered advanced and have been put to great use in the subsequent Mi-26 (which is – unbelievably – an even more impressive aircraft).

Meanwhile, back in Croatia, RA-21132 is having far less success. A stock, early-model Mi-6 with the serial 2402, it is now sitting at the far end of the field on the furthermost military helicopter pad, alone and forgotten. The lettering on the fuselage suggests it had once been operated by Aeroflot – though this is questionable, given the Soviet Air Force’s habit of operating transport aircraft in civilian Aeroflot colors. As this appears to be a non-passenger version, we can safely assume that it has had a military background (at least at some point in its life).

How it got here and why is an even bigger question and there is not clear agreement on that front. The most plausible version is that it was bought during the Civil war of the ’90s (the RA- prefix would suggest a post-1991/92 acquisition) at the end of its service life, flown here and dumped when its resources ran out and the subsequent UN armament embargo on Croatia meant spares would be impossible to come by. Whatever the case, it has been sitting here for more than 15 years, stripped of everything useful that could be carried away without heavy machinery (the engines are still up there, which could rule out any systematic and organized cannibalization).

Because it’s at the other end of the field – and the only way to reach it would be via the military base or a long trek through the grass right across the field – we don’t visit it often, but vandals do not seem to mind the exercise, as the helicopter is in a ever-worsening state every time I visit. That not being often, I’ve put together a collection of photos taken in 2005, 2006 and a couple of days ago (and many thanks to Dean T. for the drive in the AK Zagreb van 🙂 ), of varying quality and taken with various cameras… but with the key points covered :). 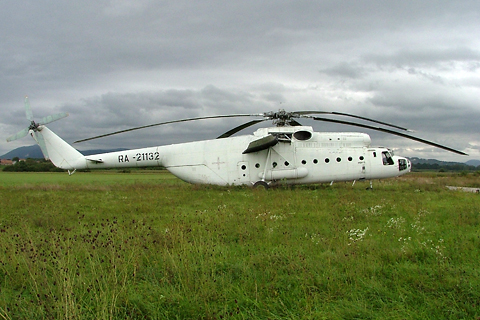 With an overall length of 33 meters and a rotor diameter of 35 meters, this is one huge machine! Shot in 2005 with my old Fuji S5000 while I was helping with a precision landing championship at the RWY 10 end 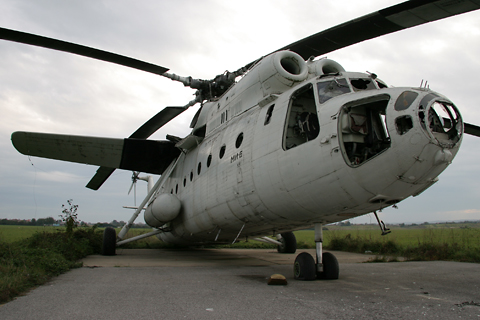 Up close a year later. From right beside, the Mi-6 is more impressive than the A380 - especially given it's a helicopter. To improve cruising efficiency and get some load off the main rotor, the Mi-6 was fitted with not-at-all-insignificant span wings, which were removed on both the firefighting version and the follow-on Mi-26 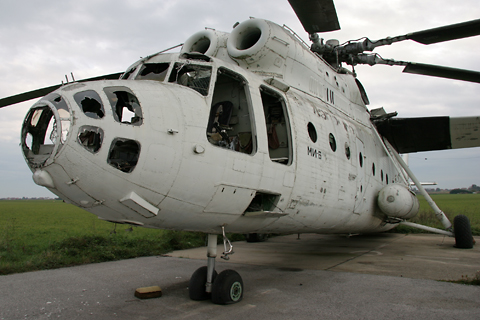 More akin to a fixed-wing aircraft than a helicopter, the Mi-6 required a six-man crew, including a pilot (who sat on the left), copilot, two flight engineers, a navigator and radio operator. During military and cargo ops, this could swell to even more when you add the Soviet equivalent of the loadmaster 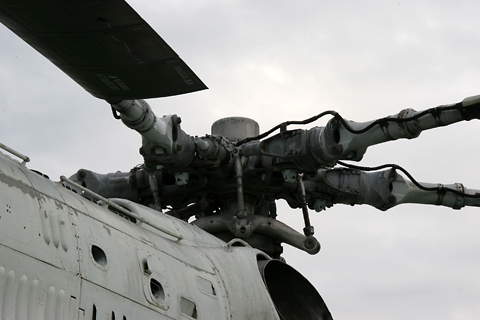 The main rotor hub. A complicated - and very advanced - piece of machinery turning the giant five-blade rotor. Much like on the An-225, during takeoff the blades have to lift themselves first before they get to grips with the 40-odd tons of fuselage and cargo remaining 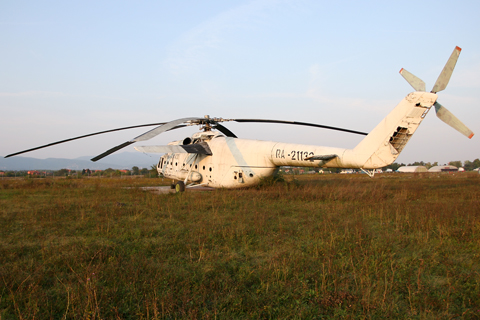 Taken a week ago, with RA-21132 looking a lot worse for wear. The fabric covering the vertical stabilizer was torn off, while pointless nationalistic graffiti on the fuselage side dealt a further blow to the dignity of this fascinating machine 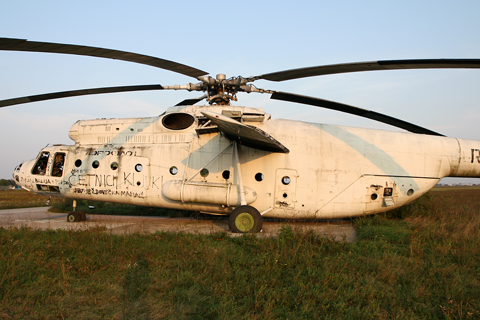 Up close, the size of the Mi-6 becomes more apparent - when you can compare it to known details such as doors and windows. Like most Soviet helicopters, the Mi-6 carries its fuel tanks externally, seen here strapped to the mid fuselage 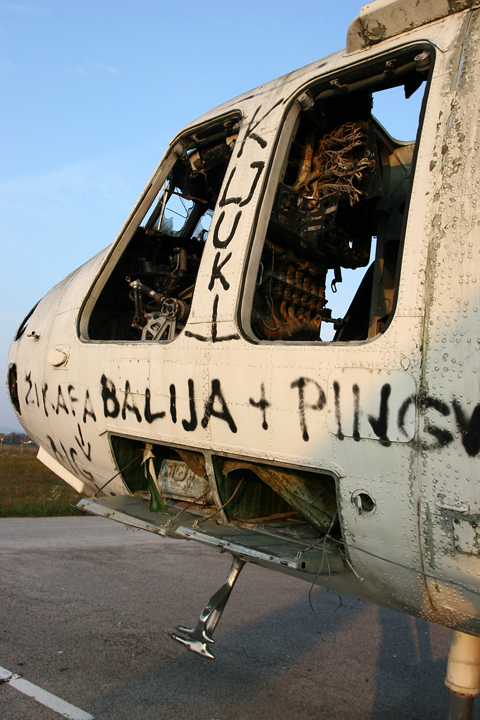 Inviting, but I decided not to climb aboard. The military might have had some objections and given the state on board, I didn't want to risk falling over - or through - something. Pictured are the pilot's and one of two flight engineer stations. The two compartments below the cabin look very much like avionics bays 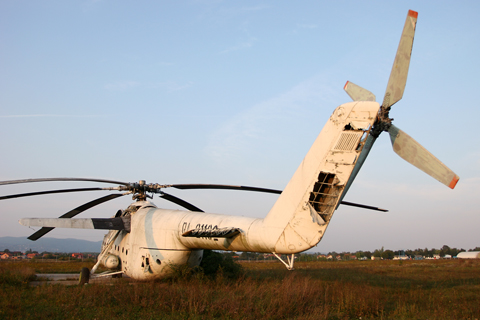 There were some halfhearted suggestions to turn RA-21132 into something useful, like a restaurant, but it appears destined to rot here for a long time to come. A sad end for an impressive machine, beyond any meaningless repair... 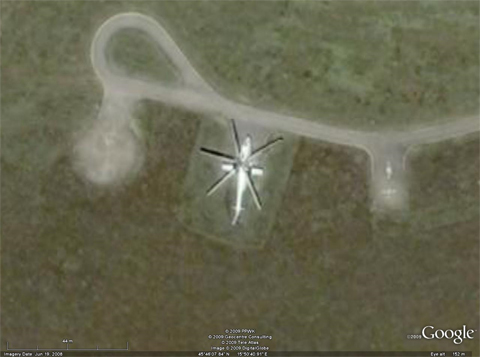 One thought on “Derelict Report – Mil Mi-6 at Lučko”