While idly browsing the BBC News website a few days ago, I came across an interesting article featuring Mr. Tim Peake, the first UK resident accepted into the European Space Agency (ESA) as an astronaut-trainee. A former Royal Army helicopter pilot, he has made a rather unusual jump into spaceflight, becoming part of new multinational European crew – currently undergoing microgravity and zero G training – slated to man the expected 2013-2014 mission to the International Space Station.

Alongside Mr. Peake’s fantastic personal achievement, the centerpiece of the article – posted here – was the unusual Airbus A300 used for the group’s training, getting a new lease on life as a zero G simulation platform. And having had the great privilege of visiting the said aircraft at last year’s Paris Air Show, I thought I could just as well do a short feature on it, to break my single-engine piston trend of late :).

Operated by the French company Novespace on behalf the government space agency Centre National d’Études Spatiales (CNES) and ESA, F-BUAD is a very interesting Airbus. A very rare first-generation A300B2-103 from 1973, it is the third A300 – and the third Airbus of any sort – ever produced. The first production-standard A300, it is also the oldest Airbus aircraft still flying, which is, given its current age and mission, a more than impressive testament to the design’s durability and reliability.

Since the BBC article explains its mission and flight profile in greater detail than I could achieve here – including a handy graph that says a thousand words 🙂 – I’ll skip that and head straight for the juicy bits: the photos :D. 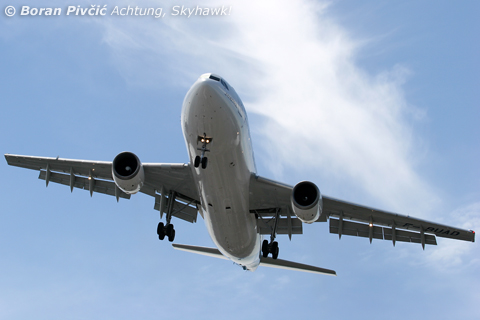 Banking left for a "dirty" low pass during one of the show's trade days. Despite being built 37 years ago, F-BUAD still looks sharp, courtesy of a thorough maintenance program carried out by Sabena Technics in Belgium. Lacking the later models' central fuselage fuel tank, the B2-100 series were the lightest of all A300s, which made them suitable for various test work - indeed, at one point in its life, F-BUAD had served with General Electric as an engine testbed

Size does matter? 🙂 Dwarfing the small CH650, F-BUAD easily dominated this part of the ramp. Even by airshow visit standards, this aircraft was absolutely spotless!

According to an aircraft register I've found, F-BUAD has never flown with an air carrier in regular commercial service. Owned for most of its life by Airbus, then GE and now Novespace, it appears to have been used exclusively for promotional and test flights, which probably means that - despite its "advanced" age - it is one of the lower-time A300s remaining...

While it still looks like the run-of-the-mill A300 outside, inside it's a different story. From the second passenger door back, the cabin has been cleared and lined with soft padding. Configured depending on the needs of the mission (which can also include experiments requiring microgravity), here it is set up for astronaut training - which, for very understandable reasons, includes covering up the windows 😀

Front of the doors, the cabin looks more familiar, and is intended to accommodate both the "passengers" and tech staff - as well as additional crew if required - during non-mission flight phases such as takeoff, landing, climb and descent. A similar arrangement is also set up in the back of the aircraft 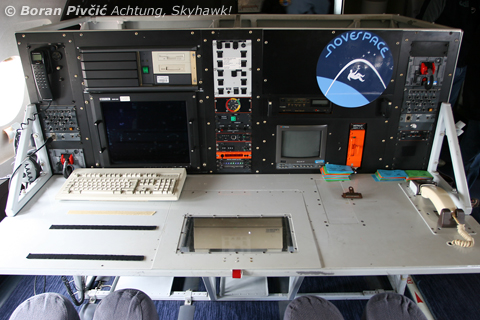 Quite understandably, almost every panel and station on board is equipped with a G meter 🙂 (small multicolor gauge in the center). Though missions are flown between 0-1.8G, the safe limits for the aircraft are -1 to 2.5G, leaving plenty of room to spare. The station pictured is (I think) the main mission control station, used - among other things - to monitor the aircraft's flight path. Note also the floppy disk drive above the left screen 😀

A view backwards showing how commodious an airliner actually is when you remove the stuff inside. At Paris, short tours were offered to a limited number of people per day, one of which - combined with press accreditation and my mediocre knowledge of French 😀 - had allowed me to snoop a bit more around this fantastic aircraft

Now this is a cockpit! 🙂 The piece de resistance of my extended tour, this was my first visit to a widebody flight deck (excluding the DC-10 I was too young to remember). Flown like all early A300s with a crew of three - including a flight engineer - F-BUAD has however been modernized with two Garmin IFR-approved GPS units, a TCAS system and a Mode S transponder - all needed to make the aircraft compatible with today's congested air traffic system. It's current mission too required some upgrades of it own, including additional reinforced controls 🙂

Further additions include omnipresent G meters, seen here to the right of the artificial horizon, provided for both the pilot and copilot. As I've been told at Paris, the aircraft is normally flown by three experienced test pilots of the French state arms procurement company. Because of the high stick forces during parabolic flight, both the pilot and copilot have their hands full with the yokes (hence the reinforcements), leaving the third pilot - who acts as the flight engineer - to operate the throttles. Due to the sheer physical effort required for this maneuver, the crew rotates between stations (pilot, copilot, engineer) every 2-3 parabolas. A standard astronaut training zero G mission could see anything up to 20 parabolas in one flight, giving a total zero G time of about 7 minutes

As always a bewildering sea of dials and switches, the flight engineer station is not for the weak of heart :D. Replaced on the more modern A300-600 by a comprehensive electronics suite linked to an EFIS system, this station provides thorough insight into the minute workings of each part of the aircraft. Despite not being manned by a "proper" flight engineer during parabolic flights, all three pilots - being some of the best test pilots in Europe - had naturally received thorough training in the A300's systems

And finally, to illustrate how all of this comes together, I’ve found three suitable YouTube videos  – the first of which was played in the aircraft itself at Paris – that show what no amount of words can :):