A bit of an odd topic, but prompted by yet another Hungarian skydive plane I saw at the field a few days back. Given the relative lack of suitable skydive planes native to the field – except our Cessna Skywagon, 9A-BKS, currently undergoing repairs following a propstrike – and the rich, varied and relatively cheap general aviation scene in neighbouring Hungary, it’s not unusual to see some of their aircraft chartered for a few days during intensive skydive ops. This gave me the idea to make a small photo compilation of all the aircraft (all three 🙂 ) in this category I’ve seen and photographed.

The first one I’ve spotted, back in June 2007. Flew a lot together with another Croatian example, 9A-DIZ, but was sadly lost on January 11th, 2008., when it hit a mountainside in Slovenia in poor visibility. Of the crew of two, one died, while the other suffered severe injuries. 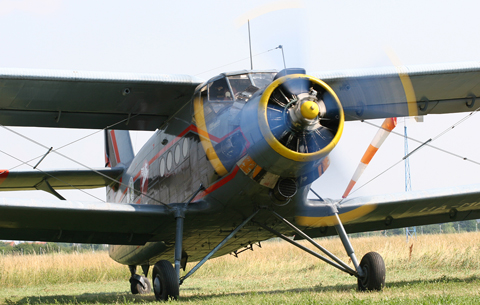 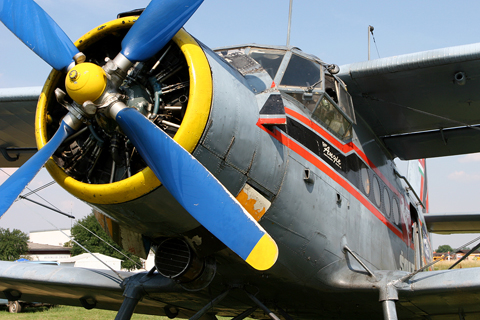 More nose detail :). At least the prop is nice and shiny. 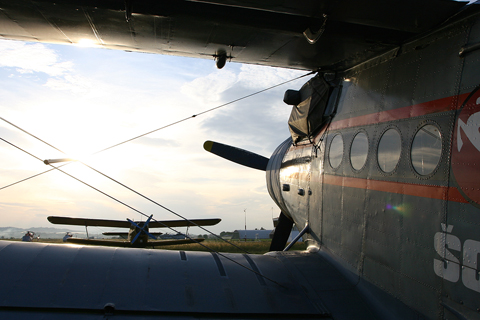 Looking across to DIZ after a busy flying day. Despite looking far better on the exterior than MKK, for the duration of its stay at Lučko DIZ was continually plagued by engine problems

The newest addition to the list was first seen (by me) at Lučko on April 18th, 2009. Not much info about it is avilable and even the ultimate resource – Airliners.net – had only one previous photo of it. And to add insult to ignorance, it taxied out right under my nose when I had arrived at the field and was later grounded as well when its tailwheel tire burst, denying me a photo of it inflight… grrr. 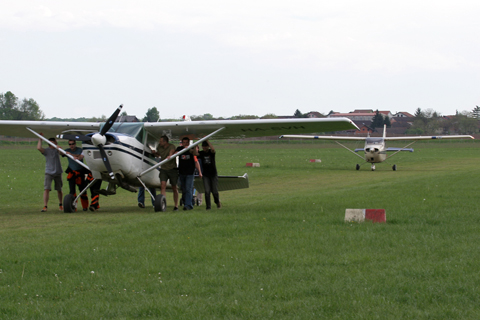 You up front, move it! Taxiway hogs... 🙂 A cheerful group of skydivers pushing their plane back to the hangar all the way from the RWY 10 threshold - more than a kilometer away. 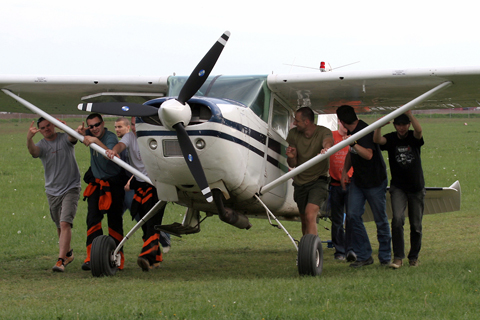 Most photographers would have been content with just a smile or a wave, but I hit the jackpot here! 🙂 Dedicated to all the guys and gals who like to jump out of perfectly serviceable airplanes 🙂

The brave men of Aeroklub Zagreb lifting the tail to place supports under the fuselage. These would hold the tail up without human intervention and allow the wheel to be changed (which the guys tell me is a 15 minute job, since that often happens on our local Skywagon)

An aircraft built in Russia, with a Czech engine, registered in Hungary, flown by a Slovak pilot and operating in Croatia… can it get any more complicated? 🙂 Seen this handsome thing for the first time at the 2008 Lučko Airshow on September 20th. Powered by a Walter M-601 turboprop engine delivering 540 HP, this thing packs some serious punch for its size! Visited Lučko courtesy of the boss of our Croatian Aviation Forum association.

Blending in nicely there...

Another nose detail, though there's not much to see. The original Russian Finist, the SM-92, had the tough and durable VOKBM M-14 9-cyl radial engine, but somewhere along the line someone in Hungary decided to stick a turbine in it. And voila! 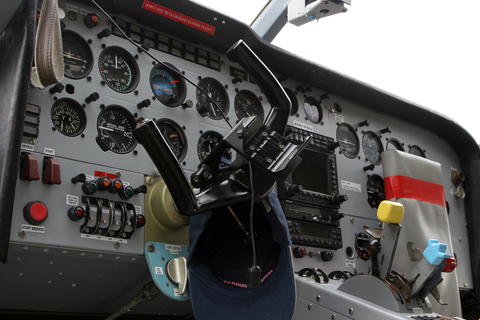 Despite the aircraft's rather agricultural appearance, it has an excellent panel equipment package. Everything's here - moving map GPS, Mode S transponder and a full IFR suite of instruments.

I'll have one to go as well!